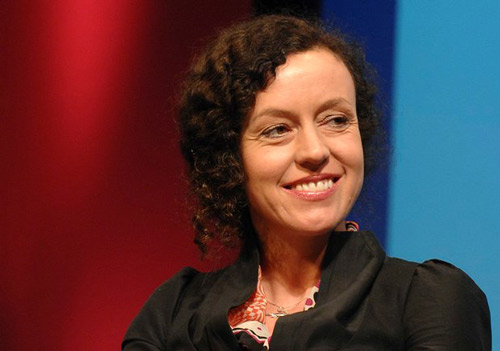 Maria Schrader is a German actress, Screenwriter, and director credited for directing Love Life. The movie won awards in 2007 and is based on the novel by Zeruya Shalev. Maria started her career in 1992 with the movie I Was On Mars directed by Dani Levy.

Schrader married her director husband and is blessed with one child. Find out more about her husband, daughter, movies below.

Who is Maria Schrader? Her Bio and Wiki

Maria Schrader was born on September 27, 1965, in Hanover, West Germany. This 5 feet 7-inch actress was born under the sun sign of Libra. From an early age, Maria was appearing in local theatre. Her father and mother were also from an artistic background and thus supported her career choice.

Schrader quit her high school and joined the Max-Reinhardt Seminar in Vienna. She learned about films and acting there which helped her in her career.

This 53-years-old actress started her career at the age of 23. Maria acted in the movie directed by her former boyfriend Dani Levy. Following the success of her movie, Maria acted in Nobody Loves Me, Burning Life alongside Anna Thalbach, Max Tidof.

Her most notable role came in 1999 with Aimee & Jaguar directed by Max Farberbock. Maria played alongside Juliane Kohler, Heike Makatsch, Johanna Wokalek. Schrader wrote other movies including Love Life, RobbyKallePaul, I was on Mars, Stille Nacht, and Meschugge.

Maria also played in Deutschland 83 which became the first German-language tv series on the US Media. Recently in 2018, Maria acted in Deutschland 86 and Fortitude. Fortitude is an American tv series which ran from 2015-2018. The cast includes Richard Dormer, Sienna Guillory, Mia Jexen, Luke Treadaway, Alexandra Moen, Darren Boyd, and many more.

Schrader married director Rainer Kaufmann. Rainer directed movies like Ich Will Dich, Runaway Horse, The Pharmacist, and Talk of the town. There is no rumor surrounding the couple separation and they are living in a happily married life.

Rainer and Maria welcomed a daughter named Felice Kaufmann. Her name was kept after the inspiration from the character in the movie Aimee & Jaguar (1999). Felice sometimes accompanies her mother during the acting rehearsal of her movie.

Before marrying Rainer, Maria was in a committed relationship with the director Dani Levy. Dani and Maria together made 11 movies including Aimee & Jaguar, I’m the father, Silent Night, Halbe Welt, and The Giraffe.

Maria is a terrific filmmaker and is also the jury at the Berlin International Film Festival.

What is Maria Schrader’s Net Worth?

The estimated amount of wealth Maria Schrader has is at $500,000. Most of her earnings come from her directing and acting career in movies. Her award-winning movie Love Life made $1,186,250 at the box office from which she must’ve made a good earning.

Maria also hosts and judge film festivals. She is the Jury member of the Berlin Film Festival from which she must’ve made reasonable earnings. Schrader lives in Berlin with her family in her home which cost around $1,976 per 60-meter square.

Maria has worked hard over the years for the quality of life that she has now. The Net Worth of her Husband is not known yet but we can assume he also has a similar amount of wealth to that of his wife.