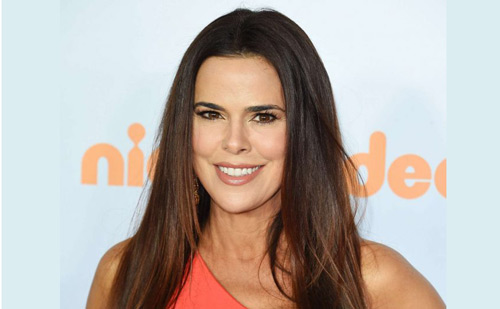 The American Actress Rosa Blasi is known for her role as Luisa Delgado in the medical drama Lifetime and TV series Strong Medicine. Rosa also acted as Barb Thunderman on the Nickelodeon series The Thundermans.

So far, she is currently in a marital relationship with a businessman, Todd William Harris. She also has a previous marriage record. Well, know everything about her current and past matrimonial life.

In this article, we discuss the details of Rosa’s early life, career, relationships, affairs, net worth, and her overall achievements. Let us take a deep dive down her life.

Rosa Blasi was born on December 19, 1972, in Chicago, Illinois. She was born to parents Rocco Blasi and Joyce Blasi of Italian, Irish and Hispanic origin. Her parents were former soprano singers. Rosa also has two sisters Marina and Tasha along with two brothers Michael and Rocky.

You miiiiiiight say I'm addicted to GoGirl sugar-free energy drinks that give to breast cancer research 365 a year! pic.twitter.com/Q4STbvsg

Previously, Rosa was also trained as a soprano singer like her parents. She took piano lessons, dance classes, and voice lessons during her early years as well. As Rosa was born in a family possessing many talents, she also inclined towards performing on stage. So, Rosa started performing on stage from the tender age of ten.

Similarly, Rosa performed at the Piven Performance Company as well as The Second City. Along with that, Blasi starred in numerous musicals and toured with the musician Kenny Rogers.

The American Actress first debut as Shelly in the CBS soap opera The Bold and the Beautiful in 1996. Later, she appeared in the movie Hide Tide in the same year. The next year, Blasi played the role of April Beane in the UPN channel series Hitz for ten episodes. Furthermore, Blasi guest-starred in several other TV series like Frasier, Becker, Caroline in the city, Sons of Thunder, Grown Ups, V.I.P and Beverly Hills.

Additionally, Rosa also starred alongside Bob Hoskins in the film Noriega: God’s Favorite. In 1999, Blasi played the role of Clara Covington in Beverly Hills. Rosa’s longest run was starring in the drama Strong Medicine as Dr. Luisa Delgado from 2000 to 2006. Likewise, Rosa also starred in Shootout.

Kennedy Center Honors lewk Dress by @alirahimila thank you from the bottom of my heart to you and John ❤️ Earrings from @xivkarats in Beverly Hills. Shoes @ysl #kennedycenterhonors #cinderella #smokeandmirrors

Moreover, Rosa performed in her first horror film The Grudge as Maria Kirk, the wife of Bill Pullman‘s character. This was her first major role. Blasi acted in a crime movie Lesser of Three Evils in the same year. Correspondingly, Blasi featured in an episode of the police drama series CSI: Miami as Ana Garcia.

In addition to that, Rosa acted as Ronnie Cruz in the comedy-drama series Make it or Break it in 2009. Likewise, Blasi played the recurring role of Blake Thatcher in drama series Lone Star aired on Fox Network. In 2014, Rosa appeared in The Haunted Hathaways telecasted on Nickelodeon.

Doing the orange carpet with my TV family at the #nickelodeon #HALOawards #Thundermans pic.twitter.com/7SFcVlWU1J

Other than that, Rosa was also a part of a benefit concert called What a Pair where all the proceeds funded to breast cancer research. She appeared in talk shows like Politically Incorrect with Bill Maher and The Late Late Show with Craig Kilborn. Furthermore, Blasi wrote a comic memoir Jock Itch in 2011. Rosa gave a comic presentation of her relationships with athletes in this book.

Who is Rosa Blasi’s Boyfriend? Is she Married?

The reality TV star Rosa Blasi has married twice. Her first marriage was with her longtime boyfriend Jim Finn. They married on February 14, 2004, and ended their relationship after 4 years in 2008. The couple birthed a beautiful baby girl Kaia Finn on September 20, 2006.

I can't believe a baby fell out of me 4 years ago this week!

After her first marriage ended for unspecified reasons, Rosa remarried. Her second marriage, as well as the current relationship, is with Todd William Harris. Todd is an American business professional and an investment banker. They married on May 3, 2014. Todd is a mortgage broker and they met through the dating site match.com.

My favorite family photo from 6 years ago ? by @laurentlevy that hangs in my bedroom. You can feel the excitement from these two little girls who suddenly found themselves a sister (just 6 weeks in age apart). #modernfamily #fate #newbeginings #2013

The loving couple Rosa and Todd are taking care of Todd’s step-daughter, Kaia. Along with that, they have another child after Todd’s previous relationship named Ryan Harris. Moreover, they are living a happy life and aren’t involved in extramarital affairs.

How Much is Rosa Blasi’s Net Worth

The 46-year-old actress, Rosa Blasi has an estimated net worth of $1.5 million. Rosa has been able to amass her massive wealth through the help of her profession.

Moreover, Rosa appeared in many movies and television series. Along with that, she has award-winning performances in several movies and an incredible sense of humor. Being so talented and well experienced in the acting field, her income has probably grown with the number of movies and tv shows.