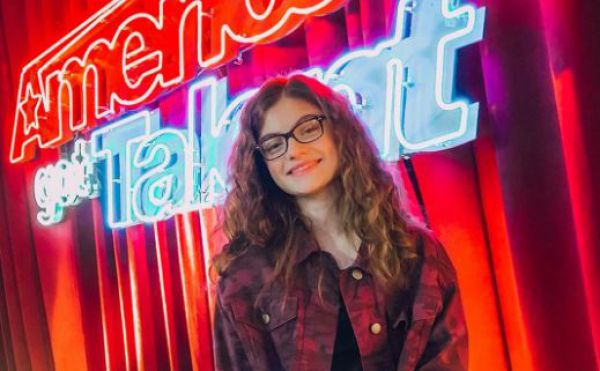 Are you a regular viewer of the United States’ popular talent competition show, America’s Got Talent? If yes then, you must have watched the latest season of 2019. And, today we are going to talk about a contestant who melted everyone’s heart with her act. The 15 years old Sophie Pecora‘s audition in episode 1401 of the show consisted of singing and rapping her original song “Seventh Grade,” a song about her struggles with being bullied in school.

Sophie Pecora is an American singer and songwriter whose career was juiced up when YouTuber Shane Dawson discovered her. She created the original song “Best Friends for Cheddar” with Shane and his friends in 2018.

Who is Sophie Pecora? Know her Age, Bio, Wiki

Sophie Pecora is a pop singer born in Danville, California, United States, on October 26, 2003. Her mother’s name is Lea Pecora and father’s name is Oliver Pecora. Besides, she grew up with a brother named Dominic. Sophie’s birth sign is Scorpio.

Sophie revealed that she has been interested in singing as long as she can remember. She began writing songs, raps, playing guitar, piano, and drums at an early age. Also, she studies in a local school in Danville.

Her parents have been incredibly supportive of her career. Her father, Oliver, has set up a recording booth in his walk-in closet. Also, he helps Sophie to film her videos. Growing up she followed artist like, Ariana Grande, Taylor Swift, Keith Urban, Charlie Puth, Justin Bieber, Eminem, are her source of inspirations.

Sophie actually boosted her career when she collaborated with YouTuber Shane Dawson. The two recorded a song together called, “Best Friends for Cheddar”.

Sophie Pecora on America’s Got Talent

The young rising star, Sophie Pecora, is one of the contestants of America’s Got Talent. She appeared in season 14, episode 1401 and sang/rap her original song “Seventh Grade.” A song about her struggles with being bullied in school. Throughout her act, judges, along with audiences, looked stunned by her performance.

Upon finishing the act, judge Gabrielle Union said, “We asked for artists to come up here and bare their souls and wow us and honey you did. You’re so young, but you spoke to me, and I’m 46. You’re special.” Further judge Howie Mandel added that she is a unique artist. Likewise, judge Julianne Hough said her act came from the core of her heart. And judge Simon Cowell said that it was a very emotional song and he liked it a lot.

Seeing their daughter on stage singing in front of thousands of people, Sophie’s parents were full of tears backstage. She will now go to another round. After appearing on AGT, Sophie’s fame is rising day by day. She once revealed that her dream is to tour around the world singing her songs.

This 15-year-old singer and songwriter, Sophie Pecora is just beginning her professional career. Although she began singing and writing at an early age, it was limited only to YouTube and local crowds. After appearing on America’s Got Talent, she gained extensive exposure, and now we will talk about her income and net worth.

As of 2019, Sophie Pecora has a net worth of $25,000. She began performing for crowds at the age of 13, in Venice Beach and performed live at Pier in San Franciso, California in late 2017. Her cover and original songs on YouTube have helped her amassed a massive fan following. As per socialblade, she earns around $10,000-$20,000 per year from YouTube. Besides, she makes about $1,000 monthly.

As time is passing by, Sophie’s fame has been increasing day by day across the country and social media as well. As of July 4, 2019, she has over 171k Instagram followers and 117.8k Facebook followers.

Sophie has a height of 1.5 m (4 feet 10 inch), and her body weight is around 98 lbs. Further, she has blue eyes and light brown hair. Likewise, Sophie’s unique feature is her cute dimples and lovely smile.