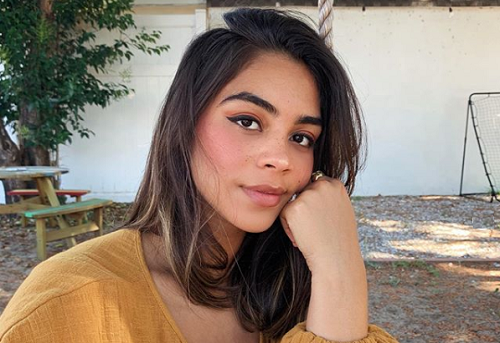 You might know and be familiar with the famous Instagram personality Taylor Giavasis. She has over 633k followers on her Instagram profile as of July 2019. Also, she became famous for her relationship with Nash Grier.

With success in her career, Giavasis holds an estimated net worth of $500k. How is her personal life? Is she married or dating any guy? Let’s get into the article Taylor’s to know all the answers to the question.

Taylor Giavasis was born on 10th August 1997 in Canton, Ohio, the USA, under the birth sign Leo. She is the daughter of Nikki Giavasis, an author and a social media influencer, whereas her father’s information is unknown.

In addition, Taylor is the granddaughter of Nick Giavasis and Sue Giavasis. Taylor spent most of her childhood with her brother Jordan Giacasisle.

Who Is Taylor Giavasis’ Boyfriend? Know About Her Relationship

The lovely social media personality Taylor Giavasis is not single anymore. Yes, you read that right. Taylor is in a romantic relationship with Nash Grier, an American Internet personality. At Paris Fashion Week, when Taylor was 17 years old, the couple met each other.

After knowing each other, the couple began dating in 2015, and since then, they have been together. Moreover, Taylor and her boyfriend spent vacations together and were spotted at various events. Further, they attended Teen Choice Awards in Inglewood, California, in 2016. In an interview, Nash stated that he wants to thank Taylor for being there and changing him in many ways.

More on the detail!

Further, on Snapchat, Taylor showed off her brand new diamond ring on her lift ring finger. After that, her fans assumed that Nasha and Taylor got engaged. Many fans congratulated them and further wrote, “they are way too young to get married. What is up with everyone getting engaged lately.”

After all the comments, Giavasis took Twitter to clear the rumor. She tweeted that the ring was her mother’s, and it was not an engagement ring.

After a long time of the engagement speculation, Taylor finally got engaged and further revealed her attention via Instagram on 26th March 2019. She even showed her diamond engagement ring. A

also, her boyfriend-turned-fiance expressed his happiness via Instagram, saying that Taylor finally accepted his proposal.

Taylor Giavasis earns a hefty amount of money as a social media personality. Her net worth is around $500k, similar to Miguel Almaguer’s. She makes a satisfying income from her endorsements, brand promotions, and other monetary works.

On the other hand, Taylor’s fiance Nash’s net worth is $3 Million as of 2019. He earned such a colossal amount from his successful career as a social media personality. Furthermore, Nash adds money to his bank account through endorsement deals with major brands.