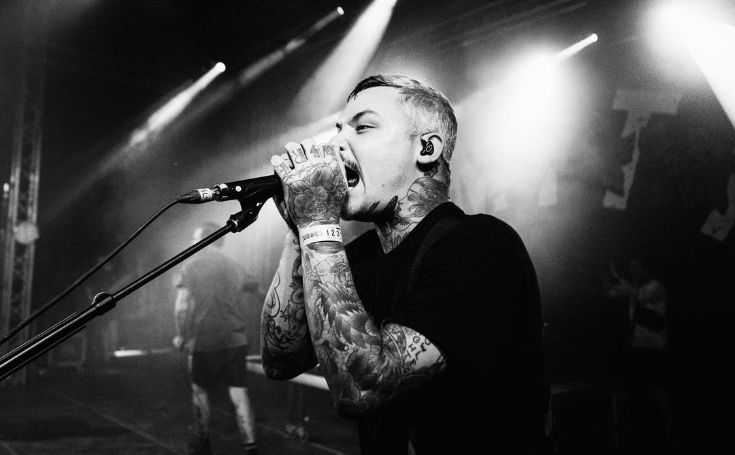 Ahren Stringer is an Australian singer who got immense stardom as the lead vocalist of the renowned band The Amity Affliction. The band is known for its performance on struggles and abuses in life.

Born on June 5, 1986, Aren hails from the beautiful city of Australia. Further, he has been involved in the music industry from a tender age.

Stringer and his friend Troy performed in school concerts during their heydays. Stay connected to us and know everything about these prominent musician’s life.

They formed the popular metal band in Gympie, the South-East of Queensland in Australia, when musician Ahren and his mate Troy Brady were in high school.

Moreover, they give the band’s name after a close friend who passed away in a car accident at 17.

They formed the name Amity for the legacy of their friendship, and Affliction referred to the band’s loss suffered because of his sad demised.

Besides, he is obsessed with getting inks on his body part; his huge tattoo is of deer, which is on his chest along with the thought Soon, We’ll Be Dead, and To Death N We’ll Be Wed.

On his hand, he has many AC DC tattoos and has got ink for his sister, Lydia Gifford, on his neck. Also, the entertainer has many inks that have many stories behind them.

The 35-year-old lead vocalist, Stringer, likes to spend his time relaxing with shots of whiskey. Concerning his personal life, the singer is neither married nor single.

Scrolling down his Instagram profile, we can encounter him posting a pic with his girlfriend, Casey Rumble.

They have preserved their love life away from the public eye; however, they often seem to share pictures of their vacation on their respective social media handles.

Besides, the duo hadn’t opened up about their love life about when and where they met and fell in love. As of now, the lovebird is happy with each other and spend time visiting new places as they love traveling.

Additionally, his biggest phobia is about death; like, he is scared of snakes.

Also, Ahren stated that Australian snakes could be very poisonous, killing at the spot; a spider once bit his mate Joel in his sleep; as a result, he was a minute closer to death but was saved.

Before releasing the album Chasing Ghost, the album cover portrayed a man hanging from a tree labeled to have committed suicide.

That label made a huge backlash from the fan base; the band later removed the cover and apologized publicly.

In 2013, the band also flickered sexist comments against a female staff during the Warped Tour.

As a lead vocalist or frontman of the popular band, The Amity Affliction, Stringer has possibly accumulated an impressive net worth from his long career. And, his major source of earning comes from the music industry.

Until now, their released records and albums have been a great hit which has supposedly assisted to garnered a bunch of money.

Furthermore, he also makes decent wealth through live performances, tours, and concerts. Apart, he spends quite an amount to maintain a rich and lavishing lifestyle.

However, his total possessions are still behind the curtain.

Follow AllStarBio, For More Mesmerizing Contents On Your Favourite Celebrity.