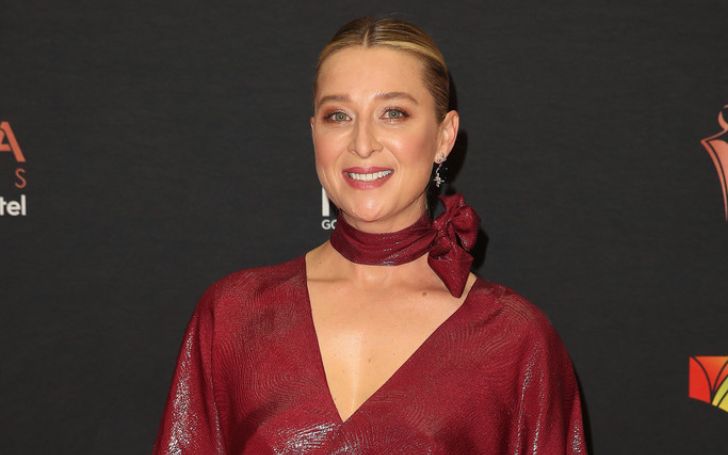 Asher Keddie is one of the amazing and talented actresses. She rose to prominence after appearing in an Australian television comedy-drama program, Offspring, on Network Ten from 2010 to 2017.

The actress has starred iconic figures like Ita Buttrose in ABC’s Paper Giants and Blanche d’Alpuget in Ten’s Hawke. However, her incredible stint as Nina Proudman on Offspring has gained her seven Logie Awards, including the coveted Gold.

Moreover, Asher Keddie’s Tv shows resume has gained her the Golden Girl of Australian Television title. Keddie has won several awards, including the Logie Award for Most Popular Actress, five times between 2011 and 2015.

She won the 2013 Gold Logie award for Most Popular Personality on Australian Television. Also, she has been nominated twice for the awards.

Born and raised in Melbourne, Victoria, Australia, Asher Keddie is an Australian actress. She had her breakthrough role in Foxtel’s Love My Way in 2004.

First, the actress had small citing roles as a teenager. She is best known for Offspring, Love My Way, X-Men Origins: Wolverine and many others.

Recently, the actress has starred in the film Swinging Safari alongside Guy Pearce. Also, she has shared a screen in the Tv series Stateless with Cate Blanchett.

Asher is also famous for her recent Tv series role in Nine Perfect Strangers as a grief-stricken mother, Heather Marconi.

Asher Keddie is married twice. First, she was married to actor and musician Jay Bowen. They walked down the aisle in January 2007. Their marriage didn’t last long.

Sadly, Asher and Jay separated in December 2011. The reason for their separation remains behind the curtains.

The actress and the artist are having a blissful marriage. Unfortunately, their encounter and love story is unknown. Asher Keddie announced her pregnancy at the GQ Men’s Award on November 19, 2014.

Asher and her husband welcomed their first child, a son named Valentino Fantauzzo.

In addition, Artist Vincent is also married twice. His first wife is Michelle. They had a son together. His name was Luca on March 1, 2015.

On July 31, 1974, Asher Keddie was born in Melbourne, Australia. She was raised by teacher parents James and Robi Keddie alongside her two younger sisters. As a child, Asher loved dancing and took dance lessons for nine years.

Unfortunately, she dislocated her knee before an audition at the Australian Ballet School at age 14. Then she grabbed an acting gig in a dancewear advertisement and later signed with an agent.

As for Asher’s education, she completed her secondary education at St Michael’s Grammar School, St Kilda.

Even though the actress is 48 years old, she doesn’t look like one. Her captivating smile with blue eyes, and blonde hair make her flawless.

Asher Keddie stepped into the film industry in 1984. Since then, she has remained active in the field. In her early career, Asher played guest roles in several Tv series. Her first role was in 1985 Five Mile Creek, then in a 1986 Fortress and a 1994 Janus.

From 1997 to 1998, Keddie came to the attention of senior network television producers. Therefore, she appeared in the tv series State Coroner and had a recurring role in Stingers from 2000 to 2004. Before this, She portrayed Marriane Sheridan in Blue Heelers’s season 3, episode 21. Likewise, on a 1997 Good Guys, Bad Guys.

Finally, Asher Keddie had a breakthrough in 2004. She played a leading role as Julia Jackson, a woman who struggles to cope with her own identity during the family tragedy in Love My Way. This role gained her. Nomination for a few awards.

In 2010, Asher Keddie became the star of the drama series Offspring. Then, she has a leading role in ABC1’s telemovie Paper Giants: The Birth of Cleo as Ita Buttrose.

Keddie had also starred in Party Tricks as Premier Kate Ballard in 2014. Also, in the ABC1 acclaimed series The Cry in 2019.

Most recently, actress Asher Keddie has starred in a 6 part series on ABC1, Stateless, in March 2020. She played Heather Marconi in the Nicole Kidman-led Hulu series, Nine Perfect Strangers in 2021.

The 48-year-old Asher Keddie holds a networth of over $6 million. She has gathered this hefty sum through her career as an actress spanning nearly four decades.

No wonder she lives a lavish life as she has been earning a large fortune from her Tv series for 38 years as of 2022. Unfortunately, there is no information about Keddie’s assets. Not to mention, the actress has made her theatre debut.

In 1998, she debuted for the Melbourne Theatre Company in Patrick Marber’s Closer. Besides, she has appeared in Les Liaisons dangereuses, Great Expectations, Cyrano de Bergerac, The Seagull, Birthrights and Life After George.

Additionally, Keddie has achieved Green Room Award nominations for her performances in the Melbourne Theatre Company production of Les Liaisons dangereuses and the Playbox’s The Ishmael Club in 2005.

For more amazing content on your favorite actress, stay tuned with ALLSTARBIO.