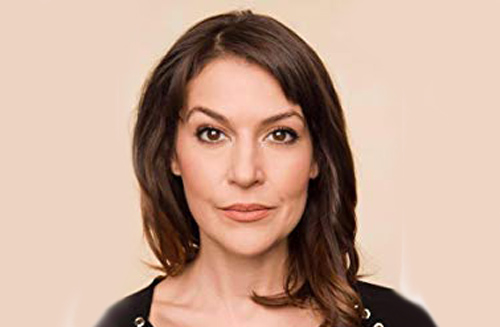 If you have ever watched the famous PBS Kids’ American children’s series, The Electric Company, then you would probably be familiar with the role of Francine Carruthers, portrayed by none other than Ashley Austin Morris. She successfully established her career as an American comedian, playwright, television and film actress.

Active in her career since 2004, Austin has surely gathered a huge capital out of her appearances and stage performances. Then, how much is her bank balance? Apart from her professional life, many of her followers are eagerly waiting to know about her relationship status. Who is her boyfriend?

Ashley Austin Morris was born as Ashley Sue Morris in 1983 in San Antonio, Texas, the United States. Her nationality is American and belongs to the white ethnic background. She grew up along with her mother and two brothers. On May 17, 2019, she posted a picture of her family.

None of us believe in pants. Mom brothers me and my struggle

Her family has always been supportive of Austin. She was interested in comedy and film industry since a tender age. After finishing her education, she immediately joined Viva La Vulva!, a comedy troupe. There she spent her time on the group’s writing and sketch comedy. Later, she enrolled from the University of North Carolina School of the Arts.

Ashley Austin Morris played in a short romantic comedy, Be Good, Daniel just after enrolling at the University. After her graduation, she went to play roles in off-Broadway productions. She played her first role of Edith in Die Mommie, Die. Her interest in comedy led her to perform stand-up comedy for three seasons as Francine Carruthers. She performed the same character in the 2009’s The Electrical Company.

@withreservation is brilliant and kind and I am blessed to have shot with her. @bridgettrama thank you for hair and makeup! You made me feel wonderful and you know I think i peeked at 7. This is my favorite shirt. I got It at wet seal when i was 12. I met and acted in front of Norman Lear in It many years after 12 and It was my favorite moment and I’m so thankful for a pic of this shirt. Thank you @withreservation thank you @bridgettrama

Furthermore, Austin also performed in the stage where her stage credits include Isabel and Bees, Love, Loss and What I Wore, and In the Daylight. She also appeared in the TV shows such as Ugly Betty, The Good Wife, and Gravity. Not only this but she also featured in The Big Bang Theory and Desperate Housewives. Besides, she has also appeared in the 2016 American film, Sully.

Born in 1983, Ashley Austin is currently in her mid-thirties. As per her birth date, her age is around 36 years as of 2019. So far, she has not revealed her actual birth date, that’s why the information regarding her birthday and zodiac sign are not available on the media at the moment.

Ashley Austin Morris’ Personal Life: Who is Her Partner?

The 36-years old, Ashley Morris is neither married nor in a relationship as of 2019. She loves to keep all her personal details under the wraps as she has not revealed single information on having a partner.

@danielvosovic I love you and I thank you for throwing such a fun birthday @kieranmulcare happy birthday! For your special day I took a pic with Daniel! I love you Kieran!!! So happy you both were born. And thankful for bW filter cause who knew my jeans were so ugly.

Austin is active on her Instagram with over 1.8K followers. Also, she has posted a lot of pictures with different guys. So long, she has not hinted anyone of them to be her partner. She stays tight-lipped when she gets asked about her relationship status.

Happy Mother’s Day to our senior ladies at the Goddard riverside senior home! If you can do one nice thing for an elderly person this weekend do It!!! So often they are forgotten and trust me, it’s a selfish act, you will feel amazing!

Well, for now, Morris is busy spending time with her loveable friends. She loves to go to visit different places with her fellow friends. Going through her Instagram, she seems to be focusing on her career and enjoying a happy life with her family. The multi-talented actress could be waiting for the right time to get into a relationship. At present, she is free of rumors and controversies.

The American film actress, Ashley is active in her career since 2004. It means she has now served her talent for over one and a half-decade and still active on her profession. As per some sources, she has a net worth of $1.5 Million as of 2019.

Her 2016 film, Sully was made with a total budget of $60 million which grossed $240.8 million on the box office. So, she must have earned a satisfiable amount through her appearances on stage, film, and TV. Therefore, she is living a rich lifestyle in 2019.