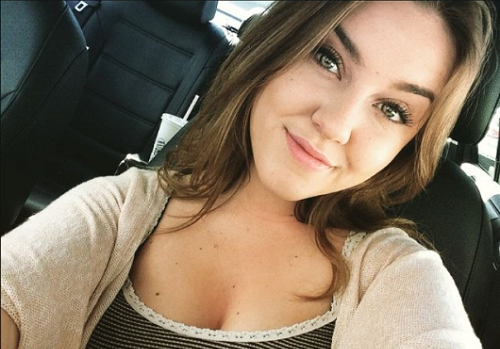 Billi Bruno is a famous American teen actress. She is best known for portraying the role of Gracie on the ABC sitcom, According to Jim. Moreover, Bruno also appeared in the commercial video for V-Chip alongside James Belushi, Larry Joe Campbell, and Taylor Atelian.

People are very familiar with her professional life and they are curious to know about her personal life. The 22 years old actress has a daughter. Who is the father of her baby?

Who Is Billi Bruno? Bio & Wiki

The famous actress, Billi Bruno was born on 20th July 1997 in Los Angeles, California, the USA, as Sarah Russo. Moreover, she has two elder siblings, Chelsea Bruno, and Hailey Bruno. Unfortunately, there is no information about her parents.

Bruno belongs to white ethnicity and holds American nationality. As a matter of fact, her sun sign is Cancer. Unfortunately, the information about her educational qualifications is still under wraps.

Billi Bruno started her acting career at the age of five. Since then, she has starred in several plays, commercials, as well as Brad Paisley‘s music video. However, Bruno rose to prominence after she portrayed the role of Gracie Mabel, Jim Belushi‘s sarcastic brainy youngest daughter, on ABC’s hit comedy, “According to Jim”, from 2001 – 2009.

Moreover, Bruno starred in the comedy “Eloise in Paris” in 2012 which is her silver screen debut. There Bruno played the opposite role of Jordana Beatty and Uma Thurman. Similarly, Billi also appeared in a commercial that promotes the V-Chip and the commercial title is “A Better Community,” for ABC.

Is Billi Bruno Married Or Dating Her Boyfriend?

Billi Bruno is the mother of a child. She gave birth to her child at the age of nineteen on 29th April 2017. Her daughter’s name is Mila Grace. However, Bruno has not revealed the father of her baby to the public. Bruno is secretive regarding her personal life.

Because of her secretive nature, it is difficult to know whether Bruno is already married or not. On 14th May 2017, she shared a picture with her daughter and a guy. But she did not write anything on the caption. The guy on the picture may or may not be her partner.

Bruno may be waiting for a perfect time to reveal the details about her relationships to the public. Besides this, she hasn’t faced rumors and controversy regarding her personal life as well as profession.

What Is Billi Bruno’s Net Worth & Income?

Billi Bruno is involved in the entertainment industry since her young age. Along with name and fame, Bruno amassed a good income. Her net worth is estimated to be around $500K as of 2019. Her income is further aided by her commercial works and advertisements

Bruno is a rising star and has along way to go through her career. Thus, along with her thriving career, Bruno’s income is also bound to increase in the upcoming days. Although she earns a hefty fortune, the details of her house, cars, and other possessions are not available.