Bobby Lee and Khalyla Kuhn Relationship, How did they Meet? 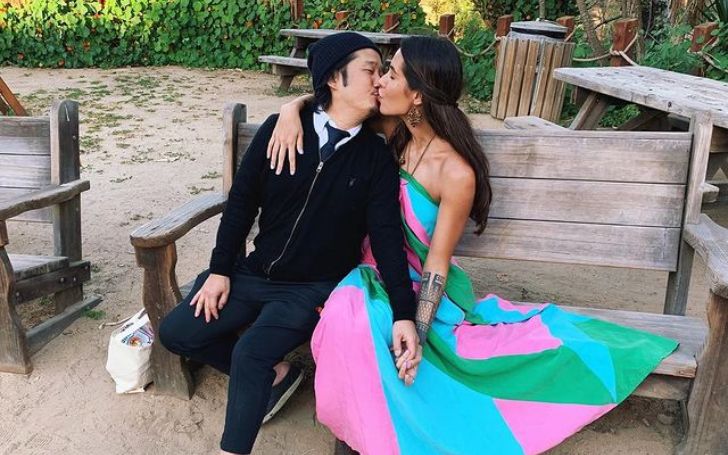 Bobby Lee is an American comedian-actor of Korean descent born on September 17, 1971. He co-starred in the ABC single-camera comedy movie with Jenna Fischer and Oliver Hudson.

Lee is best known for being a cast member on MADtv, where he served from 2001 to 2009. He is also famous for his roles in Harold & Kumar Go to White Castle, Pineapple Express, The Dictator etc.

Khalyla Kuhn is a social media figure and podcaster known for being the wife of stand-up comedian Bobby Lee. She is also famous for co-hosting a podcast named TigerBelly along with her husband,

On October 31, 1984, she was born in Cebu, Philippines, to an American father and a Filipino mother. She is raising a dog named Gobitron. Khalyla aspires to become a top social media star.

How Did The Couple Meet Eachother?

Tinder, the popular dating app, brought the two together. Before arranging to meet, they texted back and forth. Their first meetup went smoothly, and they began dating soon after.

Since Lee wanted to date tall women, he was attracted to Khalyla, who is 5.6 tall. In August 2016, Lee married Khalyla at New York Church. After marrying Lee, Khalyla’s popularity increased.

Bobby first wanted to keep their connection a secret. However, they chose to marry in New York City in 2016. Unlike most famous people, Bobby and Kayla’s wedding was not well-publicized.

After some time, many fans were aware of their connection, providing Khun with enough followers to launch an influencer career. Their union, however, was not without its difficulties.

The couple is in a marriage relationship. Khalyla Kuhn has so much love for her husband Lee that she supports her husband in various circumstances. They are happily living together.

In their podcast, Bobby jokingly remarked,

“She’s not my wife […] she’s my f—–g girlfriend, […],” and Khalyla added, “Which makes me a non-skillful gold-digger. If I’ve been with you for five years and I don’t have a ring on my finger, I am the worst gold-digger in history,”

Is the couple still together?

Bobby Lee and Khalyla Kuhn are still together in 2022. However, it’s natural if some people inquire about their separation. That’s because they’ve had a lot of marital problems and misunderstandings.

She caused controversy in 2018 when she made a joke about her husband. The beauty stated she would not have married Bobby if it weren’t for his money. This incident infuriated a lot of supporters.

However, she then clarified her position on Twitter. In 2019, she was again accused of cheating with athlete Brendan Schaub. Bobby became concerned after they exchanged text messages and DMs.

However, they were exclusively discussing sports at the time. Lee’s wife later revealed that Schaub messaged Khalyla around Christmas and asked to meet up ASAP.

Bobby Lee hasn’t done a podcast with Schaub in a few years because of this. Despite many misunderstandings and conflicts, they still live together, hoping for a happy life.