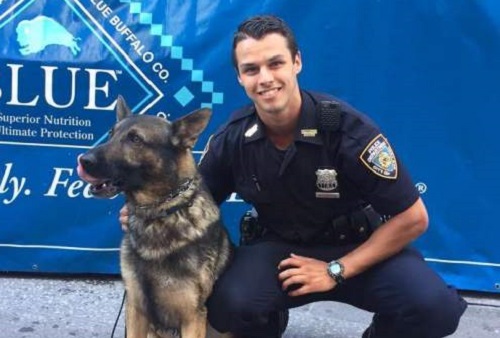 Brendan Mcloughlin is a police officer of the New York Police Department’s Midtown South Precinct and a celebrity spouse. Like another police officer Shaun Holguin, Mcloughlin gained more fame because of his wife. His spouse Miranda Lambert is a prominent country music singer and songwriter.

Mcloughlin married his wife Miranda on 26th January 2019. So, how and when did they first meet? Does he share any children with her wife?

Who Is Brendan Mcloughlin?

Brendan Mcloughlin was born in 1991 in New York, the USA. He belongs to the white ethnic group and holds American nationality. Besides this, there is no information about his early life, siblings, and parents.

Mcloughlin studied at Monsignor Farrell High School and graduated from there in 2009.

Mcloughlin’s age is 28 years as of 2019. Not to mention, he is a handsome hunk with a muscular body structure. He can’t go unnoticed in the public with his attractive looks and personality.

Mcloughlin rose to fame when he married the country singer, Miranda Lambert. Nevertheless, he is the NYPD police officer. Before, Mcloughlin joined NYPD he worked as a model during late teens. Likewise, Mcloughlin also has a page, Model Mayhem which he created in October 2010.

How Is Brendan Mcloughlin’s Relationship With His Wife?

However, Mcloughlin has a child from his previous relationship with Kaihla Rettinger. The baby was born on November 2018. On the other hand, Miranda was previously married to Blake Shelton. Later, they divorced in July 2015 after 4 years of their marriage.

Then, Miranda started a relationship with an R&B Singer Anderson East in 2015 but their relationship ended in April 2018. After their break-up, she started dating Evan Felker from February 2018 and later broker up in August 2018.

Although both the couple has a bitter past, they are maintaining a peaceful relationship. The duo hasn’t faced rumors or controversy regarding their divorce and affairs.

What Is Brendan Mcloughlin’s Net Worth?

As a police officer, Brendan Mcloughlin probably earns a decent sum of money. Brendon’s net worth is estimated to be around $500K as of 2019. Mcloughlin serves as an NYPD police officer. Also, Brendon earns a salary of around $68,261 per year.

Besides this, he was also a former model. He might have added some of the money to his income through his modeling career. On the other hand, his wife, Miranda Lambert’s net worth is around $45 Million as of 2019 which is similar to that of John Brabender.

His wife Lambert is a singer as well as a songwriter. The husband and wife must be living a lavish life relishing their combined earning.