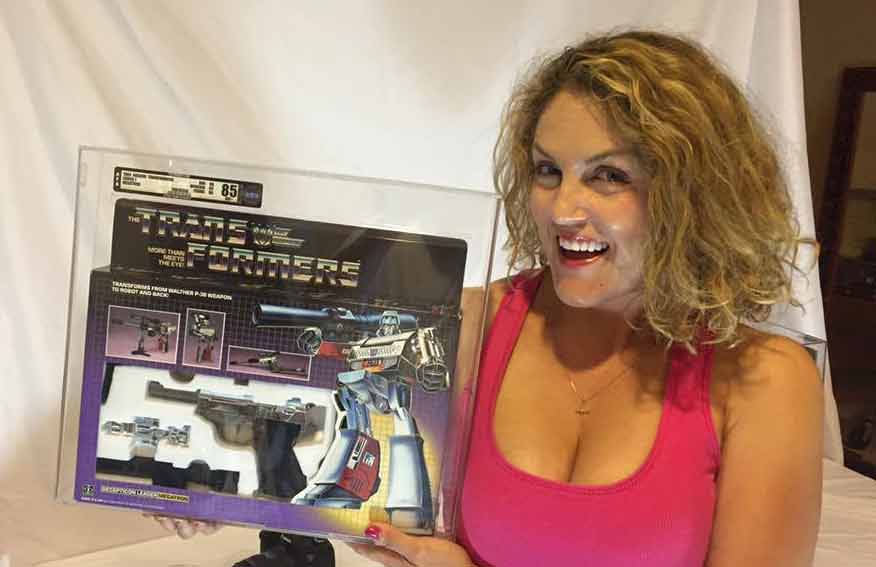 With reality TV, sometimes it’s great chemistry, and you get these gems that turn out to be everything you yearned, and the camera loves them and they just blossom on the show.

In the same manner, Casey Nezhoda with her husband, Rene Nezhoda has bloomed in a various season of A&E network’s Storage Wars along with Dave Hester and Laura Dotson, wife of Dan Dotson. Notably, the husband-and-wife team is known for The Bargain Hunters (Season 4).  Appearing in such a famous show, no surprise, Casey Nezhoda earned a huge net worth of $1.5 Million. To know more in detail scroll down.

Casey Nezhoda originally known as Casey Lloyd Born on 6th September 1974, in the United States, Casey Nezhoda established her career as a TV reality personality and entrepreneur. Her star sign is Virgo. By nationality, Casey is an American, having a white ethnic background.

She was raised by her family in the sporty environment. Thus, Casey was a talented cheerleader in high school. However, there is no information regarding her degree.

Straightaway to her career, she served as a babysitter prior to appearing in the A&E network’s reality TV series, Storage Wars alongside her husband Rene Nezhoda and stars like Dave Hester and Laura Dotson. The duo joined the show during season four, known as The Bargain Hunters (Season 4).

Make sure to watch a all new #Storagewars tonite on @aetv #team #bargainhunters will be on at 9pm episode #making #money #tonite we are spending a lot of it pic.twitter.com/IeRPOJYihM

Furthermore, in the following season, Casey and Rene became the main buyers. Similarly, in the ninth season of the show, Casey only appears as a semi-regular cast member, starring alongside Brandi Passante and Dan-Dotson.

Have a look at Rene & Casey Nezhoda’s current whereabouts:

But Storage Wars was not her first attempt to get on to the entertainment industry. She had previously auditioned for ABC’s Celebrity Storage.

Storage Wars is an American reality television series on the A&E Network that released on December 1, 2010. The show follows professional buyers who visit storage facilities throughout the state and bid on these lockers. When rent is not paid on a storage locker for three months in California, the contents are sold by an auctioneer as a single lot of items in the form of a cash-only auction.

The main cast of the show is Dan Dotson, Laura Dotson, Emily Wears, Dave Hester, Ivy Calvin, Darrell Sheets, Barry Weiss, and Casey Nezhoda herself. There are also several other cast members playing along with them. The reality show is currently operating very smoothly with the help of those cast and crew members of the show.

Casey Nezhoda has successfully made an excellent earning out of her profession. However, the exact figure of her salary is not available at the moment. Looking forward to her financial aspects, Casey owns the 7,000-sq-ft Bargain Hunters thrift store together with her husband in Poway, California near San Diego.

Also, she has earned a good amount of fortune by appearing in Storage Wars. As of 2019, her net worth is approximately $1.5 Million. Whereas, another star of the show, Dave Hester has an estimated net worth around $4 million.

Born on 6 September 1974, Casey Nezhoda is in her 43-years of age as of 2019. She is busy enjoying her early forties. As we can see, she celebrates her birthday on every 6th of September. Besides, her birth sign (Zodiac Sign) is Virgo.

Casey Nezhoda a married woman. She tied the knot with her long-term boyfriend turned husband, Rene Nezhoda. The couple has not just been in a prosperous relationship but also on the TV shows. The lovebird has made the appreciation as a powerful duo in finding the best of what auctions have to offer.

Moreover, Casey and her husband share a strong and loyal relationship with each other. That’s why the couple has not yet shared any conflicts between them which can lead them to their separation or divorce.

Furthermore, Rene shares a daughter with her spouse named Tatiana. According to the source, Case is eager to pass her bargain Hunter Thrift Store to her daughter one day. Moreover, the family is living a happy life in a beautiful house resides in the United States.

Besides, Nezhoda has not revealed any details regarding her extramarital affairs and relationships with any other guy. She is free of rumors and controversies.

The Curvaceous, buxom figure, Casey Nezhoda possesses an incredible body measurement of 40-26-37 inches which include her breast, waist, and hips size respectively. Though her figure is slim, she has a very large bust. At the same time, Nezhoda weighs 67 Kg and stands at the height of 5 feet 6 inches. Last but not least, she has long curly brown hair with a pair of Blue-Green eyes.