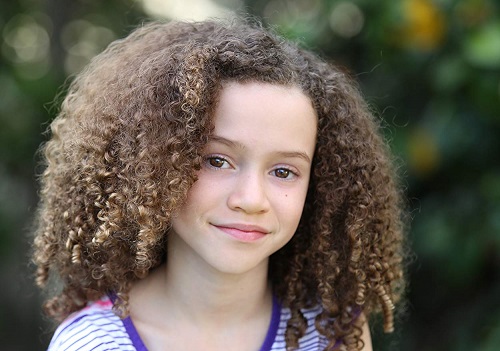 Chloe Coleman is an American child actor, best known for her role as Skye Carlson in HBO’s award-winning series, Big Little Lies. She began her acting career at the age of five through FOX’s Glee. This little star has an inexhaustible strength of athletic ability and a perceptive mind.

Coleman is just on the verge of beginning her professional career. However, she has already bagged a role in the sequel of Avatar, the biggest and most successful project ever in Hollywood. So, how much is her net worth? Who are Chloe’s parents? To know all the details, stay with us till the end!

Chloe Coleman was born on 11th December 2008, in  Los Angeles, the United States. Her father works as a camera operator, while her mother is a former actress. By nationality Coleman is American and she is of Eastern European, English & African descent.

Her birth sign is Sagittarius. Also, she has a younger sister. As of 2019, Chloe is 10 years old.

Chloe Coleman’s net worth is under review as she has just begun to involve in big multi-million dollar projects. She is about to star in James Cameron hit movie Avatar 2. She was a part of another big project, My Spy. However, just at the age of 10, Coleman proved to be a serious and talented actor.

You may like: Ben Hawkey Bio, Wiki, Age, Height, Girlfriend & Net Worth

No doubt, Chloe’s net worth and income are estimated to increase in the upcoming future. Also, now talking about her parents’ wealth, her father is a camera operator and her mother is a former actress. Hence, she grew up in a wealthy family and has a luxurious lifestyle.

Chloe has a strong and close bond with her parents. From an early age, they encouraged Coleman to follow her passion. In addition, Coleman always brings a positive attitude to the sets. Normally, her co-stars describe her as a cheerful and lovely little girl.

Recently, Coleman starred in the movie My Spy alongside the popular wrestler-turned-actor, Dave Bautista. As per the source, Coleman always asks for suggestions and tips from senior co-stars. In addition, on the set, she had a swear jar for her co-stars and raised $155 during production, Bautista claimed to have given much more to her cause. “I gave you like $200 bucks myself,” he said.

Coleman is loved by all the age-group across the nation. To talk about her love life, we may have to wait another 10 years just in case.

Chloe began her acting career at the age of five playing the role of a ballerina dancer on Fox Network’s GLEE. In 2013, she began her career appearing in short films and modeling on America’s Next Top Model. Her big break came with her portrayal of Skye Carlson in HBO’s award-winning series Big Little Lies.

@davebautista , your friendship means the world to me! I love you so much & spending the day with you was a dream come true… this picture says it all #KISA (can you guess?) Repost @davebautista with @get_repost ・・・ I love this amazing little lady more than I can express in words. Struggling through some heart break but this beautiful little soul reminds me about everything that’s good in life. Thank you for being you @chloecolemanact …. I couldn’t love you more if you were my own child. #MySpy @myspymovie

Previously, Chloe appeared as Idit Obadya in Amazon’s Transparent, as well as Zoe Sturgis on ABC’s Superstore. Her upcoming projects which are yet to be released include My Spy, where Coleman plays Sophie Vale and Avatar 2, where she plays young Lo’ak; & the Amazon series Upload.

In her free time, Coleman loves reading, art, dance, piano, archery, animation, and directing/editing movies with her friends. In addition, Chloe is a competitive swimmer and straight-A student.

The lovely child actor, Chloe Coleman stands at a height of 4 feet 4 inches (1.32 m). Her age is 10 years as of 2019. Her special features are curly brown hair and a pair of lovely brown eyes. Well, we can’t miss her gorgeous smile and joyful nature.