If you love watching movies from the Hallmark channel, then you might already be familiar with Chris McNally. The 26-year-old Canadian actor Chris McNally is famous for his portrayal in web series like Supernatural, Altered Carbon & The Orchard, among many other projects.

Chris was also listed in the top 3 of the best Hallmark channel actors according to ranker. He has also appeared in many other movies and TV series as well. His most recent work can be seen in the television movie, A Winter Princess playing the role of Jesse.

McNally has had a very successful acting career, but that’s not all he has also shown himself in many other roles. To know more about him, keep on reading till the very end.

Actor Chris McNally originally known as Christopher McNally, who is now 26 years old, was born on November 8, 1992, in North Vancouver, Canada. He now is currently living in Los Angeles.  His mother is Vicki McNally, and the details of his father are unknown. He has two siblings brother Brian McNally and sister Kelly McNally.

Chris started his acting career from a TV series, Killer Instinct, where he played the role of ice cream clerk, which released in 2005. From then on, he has been a part of multiple projects. He is best known for his work in Altered Carbon, a hit Netflix show, The Orchard, Supernatural, and John Apple Jack. He even won an award in the category of Best Actor in a Feature film for the movie John Apple Jack staring Kent S. Leung, Mckenzi Scott, Aurora Chan, and Matthew Graham, which was directed by Monika Mitchell.

YouTube: The trailer of the movie starring Chris McNally.

McNally has been a part of many other films and TV series such as Tower Prep, Sailing Into Love, A Winter Princess, Freefall, and Supernatural starring actors like Jared Padalecki, Jensen Ackles, and Misha Collins to name a few.  He has the credit of over 30 movies in his 14 years of an acting career. Looking back at his career, it can be said that he has been successful in establishing himself as an actor. He has also started working with big studios as of now.

Chris has always been very secretive about his personal life. No details about his girlfriend are revealed yet.  There are rumors about his secretive girlfriend, but it is not certain.  He has mentioned her in many interviews though. He has stated that she is South-American, but one cannot say that the news is true or false as there are no pictures of them together.

McNally’s successful acting career has helped him to maintain a net worth of $300,000. It is also due to the fact that he has started working with big studios such as Netflix and Lifetime and supposedly earns an appreciable remuneration. From his social media account, it can be seen that he spends quite a part of his income majorly on traveling.  He can be seen visiting various places. He also enjoys camping with his pet dogs. His two dogs are of pointer breed, which has a market value of average $700 – $1000 USD. 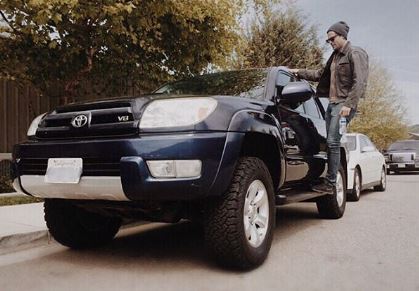 Chris also owns a Toyota V4 runner, which costs around $35,955. McNally has also produced a movie Deadweight directed by Matt Drake. He has 29.6k followers on Instagram and 3,951 followers on Twitter. Additionally, he also earns quite a paycheque by promoting brands’ trademark and name through his social media accounts.

To know more about your favorite celebrity, visit allstarbio.