The winner of 1999 WWF Women’s Championship, Debra Marshall, is an American actress and retired professional wrestling valet. She appeared in the ring with her former husband, Stone Cold Steve Austin. Further, she is famous for her appearances with World Championships Wrestling (WCW) as Queen Debra and WWF as Debra.

The 59-year-old, Debra Marshall has been married twice but has no children of her own. During her association with WWF, she became famous for her distinctive Southern drawl and large enhanced breasts. So, let’s know more about Debra’s personal as well as professional life.

Debra Gale Marshall was born on March 2, 1960, in Tuscaloosa, Alabama, United States. The details about her family background and siblings are unknown. Debra attended Holt High School and became a track-runner, cheerleader, and Homecoming Queen. As of 2019, Debra is 59 years old and her birth sign is Pisces.

Debra Marshall has been married twice but has failed in both relationships. Well, she first married, NFL alumnus and professional wrestler, Steve McMichael.The couple married in 1985 after McMichael’s mother set up their first meeting as a blind date. However, they divorced on October 12, 1998, after being together as husband-wife for 13 years.

Afterward, Debra met Steve Williams (b: Steven James Anderson) professionally known as Stone Cold Steve Austin in 1998. They moved in together in 2000 and on September 13, 2000, they married at The Little White Wedding Chapel in Las Vegas.

But sadly their marriage began to fell after a series of domestic violence occurred. Austin filed for divorce from Marshall on July 22, 2002. They legally divorce on February 5, 2003. Afterward, Austin married his fourth wife, Kristin Austin in late 2009. Currently, the details about Debra’s marital status is single. She doesn’t have any children.

The renown actress and retired professional wrestler, Debra Marshall has a net worth of $2 Million as of 2019. She earned most of her earnings from wrestling career and acting. She is popular for her previous association with World Championship Wrestling (WCW) and World Wrestling Federation (WWF). 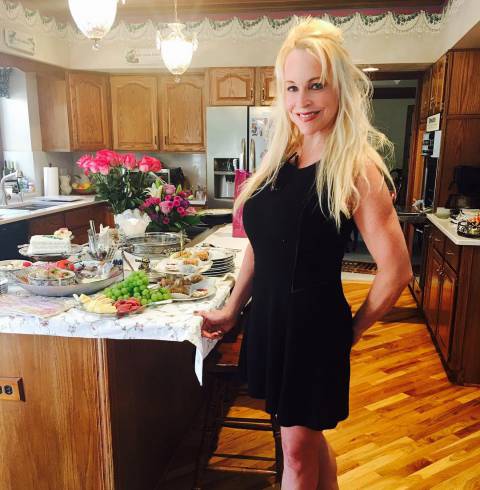 As an actress, she appeared in Texas Chainsaw Massacre: The Next Generation, Beyond the Mat, Tengu: The Immortal Blade, etc. Also, her notable television roles include Biography, Mad Tv, Weakest Link, etc. Therefore, she earned a decent income from acting.

After her divorce with Steve Austin, she auctioned her wedding ring off on eBay for $27,000. She donated a portion to “Safe Place” an organization which assists the victims of domestic abuse.

Let’s talk about Debra’s former spouses’ net worth. Her first husband, Steve McMichael has a net worth of $3 Million. He is a former college and professional football players as a defensive tackle in the National Football League(NFL).

You  may like: Diora Baird Age, Height, Net Worth, Married, Husband, Kids, Career

Meanwhile, Debra’s second husband, Stone Cold Steve Austin has a massive net worth of $45 Million as of 2019. He is a retired professional wrestler, actor, host, and media personality often regarded as one of the most profitable and influential wrestlers of all time.

The former wrestling star, Debra Marshall’s billed height is 1.65 m (5 feet 5 inch) and has a billed weight of 129 lbs (59 kg). Further, she has blonde hair and blue eyes. The details about her body measurements are unknown.

In 1987, Debra won the title of Mrs. Illinois America, in Elgin, Illinois. Similarly, in 1992, she won the Mrs. Texas USA pageant held in Houston, Texas. She first appeared in WCW in late 1995 making occasional appearances and as part of a group of Valets fort eh team of Hulk Hogan and Macho Man Randy Savage. In 1996, she began appearing regularly as a valet for her husband, Steve McMichael.

She also frequently appeared alongside her second husband, Stone Cold Steve Austin under the ring name Debra Queen. She joined the WWF in 1998 and won the WWF Women’s Championship in 1999.

She left the company in 2002 with Austin and began working in movies and TV shows. She appeared in movies such as Texas Chainsaw Massacre: The Next Generation, Beyond the Mat, Tengu: the Immortal Blade, etc. Her notable television series include Biography, Weakest Link, and Inside Edition.