If you love to watch figure skating, then you would also love to read about the famous former Canadian-Russian figure skater, Fedor Andreev, widely recognized for winning two Junior Gold Medals. He is also famous for partnering with Jana Khokhlova representing Russia in the Ice Dancing competition in 2010.

Apart from skating, Andreev has modeled for Abercrombie & Fitch and other commercials as well. For your kind information, he is engaged to Meryl Davis, a famous American ice dancer. From his profession, he has collected an impressive amount. So, how much is his net worth as of 2019? If you want to know, scroll down.

As we all know, a child can do anything if his/her parents are supportive of him/her. Fedor Andreev was also born to his famous and skillful parents who always motivated Fedor to get established in the skating sports field. As a matter of fact, his mother, Marina Zueva is a famous ice dance coach and choreographer. While in childhood, his stepfather, Alexei Tchetverukhin also coached him for skating.

Besides this, Andreev was also interested and took part in SCCA autocross and drag races. His motivating parents were probably the reason for his success at present. However, he has not revealed his educational qualifications.

Struggling for his dreams of being a skater, Fedor Andreev first skated at the Minto Skating Club. In the year of 1999, he participated and won the title of Canadian junior champion and also collected several medals. After that, in 2003, he intended to skate in pair with Jennifer Kirk, however, their partnership never took any form. After performing several years as a single skater, he finally went to ice dancing in 2010.

Following, Fedor started doing training for 5-6 hours a day. He switched his passions and started his partnership with Jana Khokhlova representing Russia. The ice dance partners made their debut in December 2010 with taking part in the Golden Spin of Zagreb. Also, they competed at the 2011 Russian Nationals. After partnering for a season, they ended their deal.

The 37 years old, Fedor Andreev recently exchanged his wedding vows with the famous American ice dancer, Meryl Davis. The couple had their wedding with great expenses at the 18th-century farmhouse in Provence in 2019.

His wife, Meryl Davis is famous for winning the 2014 Olympic gold medalist. Not to mention, she is also the winner of the 18th season of Dancing with the Stars alongside Maksim Chmerkovskiy.

At their wedding, it is reported that nearly 95 friends were invited and also attended by their family and close relatives. Before their marriage, the couple had shared much about their dating life. They were engaged on 13 July 2017 after dating over six years.

During their wedding, the groom, Meryl Davis also mentioned:

“We’d been dating for a long time and we’ve loved one another for a long time, and yet the experience of sharing that moment with each other was so beautiful. It’s probably my favorite memory ever up to this point.”

Since their marriage, the duo is spending a happy life together. Looking at their pictures, there is no doubt that the couple shares a very loving relationship with each other. Hence, they enjoy living together. Besides, Fedor is free of rumors and controversies.

The former skater, Fedor Andreev was born in a famous family. So, he never needed to think on fulfilling his basic needs. Serving so long in his profession, the average net worth of Fedor is reported to be around $500 Thousand. Other than this, his spouse, Meryl Davis has collected a capital of $2 Million as per the Celebrity Net Worth. Going through their social media, the duo is spending a lavish life with each other. 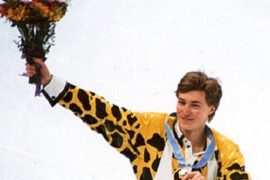