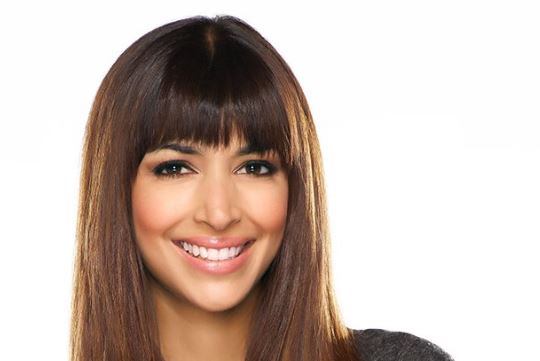 Hannah Simone is a Canadian actress, television host, and former VJ and Fashion model. Simone is best known for starring as Cece on the Fox sitcom New Girl. She appeared as Beth in 2016’s film Flock of  Dudes. She is also popular for films like Kiing Gunther, Odd Squad: The Movie, Oldboy, Miss India America, and Sati Shaves Her Head.

Simone appeared as Leena Param in the 2012 television series, H+: The Digital Series. Her other television works include in the series like Kevin Hill, Kojak,  1600 Penn, So You Think You Can Dance. Simone appeared as Dr.Monica Dewan in 2018’s series Single Parents. She is married to Canadian actor Jesse Giddings in 2016. The couple is blessed with their first child in 2017. To know more about this television host, we suggest you read the whole article.

Hannah Simone was born on 3rd August 1980, in London, England. She holds British nationality and belongs to mixed ethnicity. His father is of Indian descent. She grew up in Calgary along with her brother Zack Simone. Simone traveled through three continents from ages 7–10, attending schools in each. Simone lived in Cyprus at the age of 13 and worked as a fashion model. He stayed in New Delhi at the age of 16 and attended the American Embassy School.

She returned to Canada a year later, at age 17. She initially settled in White Rock, British Columbia, and later moved to Vancouver, where she attended the University of British Columbia. Since completing her first degree, she returned for a year to Hounslow, UK, where she worked as an officer for human rights and refugees.

Hannah Simone, 39, became tv host for HGTV Canada’s television show Space for Living soon after her graduation in 2005. She served as a VJ at MuchMusic Headquarters, as a news presenter for “Much News Weekly” and the host of the show The New Music. She worked as a VJ for MuchMusic in Canada from May 2006 until November 2008. Furthermore, she responded well to young people interested in alternative music, and during her tenure at Much, she interviewed many musicians and bands. On 21 November 2008, Simone quit working at MuchMusic and announced that she plans to move to Los Angeles, California.

Simone has won a spot on Syfy to host WCG Ultimate Gamer alongside Joel Gourdin. The series debuted on 10 March 2009 and ended on 7 October 2010 after its second season. Simone appeared on Fox’s New Girl sitcom from 2011 to 2018, where she played Cece, the best friend to title character Jess (Zooey Deschanel).

The 39 years old Simone is happily married to her long time boyfriend turned husband Jesse Gidding in 2016. Jesse is a Canadian musician, designer, actor, and photographer. The couple decided to exchange their wedding vows after dating each other for four years. Since then they are together enjoying each other’s company.

Hannah often mentioned her husband as a supporter and a good friend for her. Moreover, they have already spent more than three years of togetherness, and still, there are no signs of them getting a divorce. The love birds are blessed with their first child, a son in April 2017. She announced her pregnancy in April 2017 via Instagram.