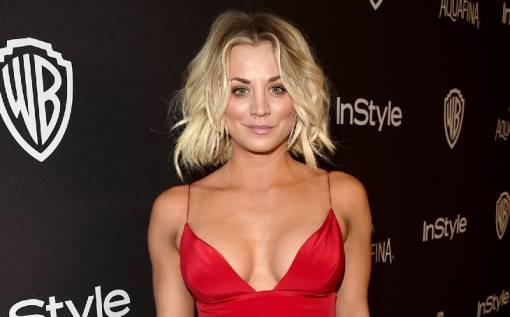 If you have ever watched the famous American television sitcom The Big Bang Theory, then you must be familiar with the role of Penny portrayed by Kaley Cuoco. She has also played in several movies such as Alvin and the Chipmunks: The Road Chip, Killer Movie, Hop, Lucky 13 and many more.

Besides, to take a deep look in the actress’s personal life, she is married twice in her life. Then who is her husband? Does the couple share any children? How much net worth did she collect from her career? To know the answer as well her bio and wiki read the article below.

Kaley Cuoco was born on November 30, 1985, in Camarillo, California, the United States. She is the elder daughter of father Gary Carmine Cuoco and mother Layne Ann. Her father is of Italian descent where her mother is of English and Greman ancestry. She grew up with her younger sister Briana. Her sister was in the fifth season of The Voice.

During her childhood days, Cuoco was interested in tennis and started playing when she was three years old. Further, the information about her educational background is still under the wrap and we can assume that she likes living a low key life apart from the media.

Who is Kaley Cuoco’s Husband? Know About Her Relationship Status

The 33 years old Kaley Cuoco has gone through several relationships to date. For the first time, she dated Thad Luckinbill in 2002. The couple was together for a short period of time. Later, she was seen with Kevin Zegers from 2003 to 2004. After being separated from Kevin, Kaley started dating Jaron Lowenstein in 2005. The couple dated for years and parted their ways in 2006.

Kaley’s long-lasting relationship was with Her The Big Bang co-star Johnny Galecki. Besides, the actress has gone through several brief relationships with C.M. French, Josh Resnik, Bret Bollinger, Henry Cavill.

First, she got married to Ryan Sweeting who was a former professional tennis player. The couple first met in mid-2013 and they both didn’t take a long time to determine that they were meant for each other. After dating for three months, Kalye and Ryan got engaged. Three months later of their engagement, the couple got married on December 31, 2013, at Santa Susana, California.

The couple looked perfect for each other and loved to spending time together. Her spouse Ryan was by her side when she was in the hospital for sinus surgery. After being together for 3 years, Kaley field for divorce with Ryan telling irreconcilable differences. Their divorce was finalized in September 2016.

After getting divorced from Ryan, The Big Bang Theory star started dating Karla Cook in 2016. Later after one year of their dating, Kaley and Karla got engaged on November 30, 2017. The couple announced their engagement through Instagram. Later the couple tied the knot on 30 June 2018. Their wedding ceremony was held in San Diego, California in front of their family and friends.

@mrtankcook you are everything to me every minute of every day! Love you like crazy ♥️❤️♥️❤️

Currently, The Big Bang star is enjoying her married life along with her husband. She posts several photos of her and her husband on her social media account, especially on Instagram. The couple is seen head over heels with each other.

Kayey has played in several movies and TV series in her life. She made her first appearance in the film as the Young Karin Carter in 1995 action thriller Virtuosity. The actress appeared on the CBS sitcom Ladies Man and in the year 2000 she portrayed as The Brady Bunch star Maureen McCormick in the TV movie Growing Up Brady.

In September 2002, Cuoco began a starring role as Bridget Hennessy on the ABC sitcom 8 Simple Rules. She has also voiced the character of Brandy Harrington on the Disney Channel cartoon Brandy and Mr. Whiskers.

In September 2007, Cuoco began starring in the CBS sitcom The Big Bang Theory. In the series, she played alongside Johnny Galecki , Jim Parsons, Kaley Cuoco. Moreover, she starred in the Lifetime film To Be Fat Like Me, which premiered on January 8, 2007. In addition, she played in 2010 film The Penthouse, Allure magazine’s, Hop, The Last Ride.

Kaley’s net worth is estimated to be around $55 Million as of 2019 making her one of the world’s highest paid television actress. If we look back in 2018 Kaley’s net worth is $45 Million. As per some source, she was paid $1 Million per episode for her role in The Big Bang Theory.

Her other co-stars from The Big Bang Theory Jonhy Galecki and Jim Parsons also earned in the same range as they are the lead cast of the series. Further, she played in the American 3D live-action/computer-animated fantasy comedy film Hop which collected the box office $184 million which was made under the budget $63 Million.

She also collected the fortune from several endorsement deals working with Ala Pilar, Avon, Ban.do, and Priceline.com.

The actress owns a mansion worth $5.49 million in Tarzana, California. The mansion covers the area of 5,200-square-foot. In addition, she has also taken a Santa Barbara-area beach house after her divorce with Ryan Sweeting.

The actress has done plastic surgery. On average, breast development costs $3,708 and nose surgery costs around $4k to $10k. She has done both of them, so she must have paid a hefty price.

The measurements of her body are 35-24-36 inches. She has maintained her figure by doing several exercises, Abs workout, and spinning.  The actress stands at a height of 5 feet 6 inches tall and weighs around 57 kg.

? thank you @j_mendel for helping me sparkle in this lovely twinkly gown! Obsessed with my @anitakojewelry & perfect @brian_atwood heels ? #criticschoiceawards

Cuoco has short and wavy hair with natural blonde color and has hazel green eyes. Her dress size is 6 (US) and her shoe size os 9 (US). Further, she wears the bra size 34 C.

Alvin and the Chipmunks: The Road Chip Brandy and Mr. Whiskers. Growing Up Brady Killer Movie Ladies Man Lucky 13 The Big Bang Theory The Brady Bunch To Be Fat Like Me Virtuosity