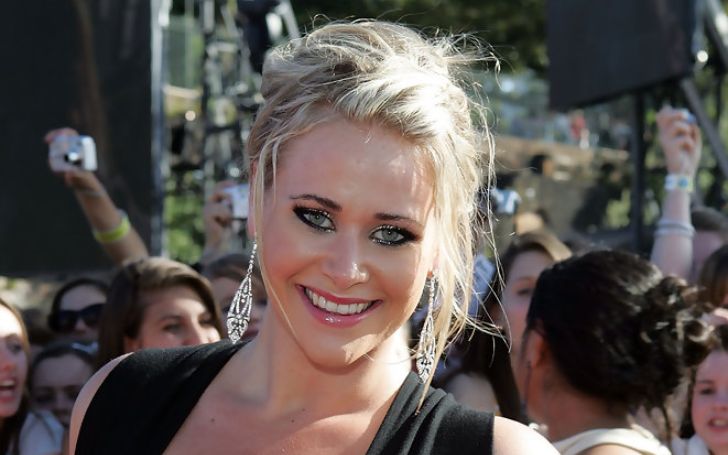 Kate DeAraugo rose to prominence after winning the fifth season of Australian Idol in 2005. She stepped away from the spotlight after releasing many solo singles and joining the female group Young Divas, including former Idol finalists such as Ricki-Lee Coulter.

Moreover, She endured a remarkable fall from fame following her Australian Idol victory 16 years ago, after avoiding a conviction for ice and weaponry possession in 2017.

Further, Continue learning this article to know every bit of detail about Kate DeAraugo!

Kate DeAraugo was born in Melbourne on November 5, 1985. Her father was a businessman and car dealer. She was the eldest of three children. The family moved to Bendigo, Central Victoria when she was an age of six months.

The DeAraugo family has a rich musical heritage, influencing Kate’s love of music and singing throughout her life. Kate began performing at school gatherings and local theatre performances at a young age and many weddings and other concerts around Bendigo.

Kate had the opportunity to sing the National Anthem at a sports gathering at the age of 14.
The Prime Minister at Crown Palladium Ballroom sponsored the event in Melbourne. As a result, Kate and Ms. Venetta Fields were acquainted during the event.
Venetta has collaborated with hundreds of international musicians, including Ike and Tina Turner, Aretha Franklin, Pink Floyd, and Australia’s own John Farnham. When Kate was 14, she began singing lessons with Venetta, and the two quickly became close friends.
A 14-year-old decided to travel to Queensland and live with Venetta after finishing VCE  because of her experience in the music industry.
Moreover, hoping that she could teach Kate about life as a musician. Kate had already tried out for Australian Idol twice and had opted not to try again. Venetta encouraged Kate to try again with a different attitude, and on the third try, Kate made it.

A Peek of Australian Idol

Kate was the winner at the end of Australian Idol over Emily Williams in 2005. She released her first single, “Maybe Tonight,” which stood at #1 on the charts for two weeks during the contest.

Kate released her solo album “A Place I’ve Never Been” and was successful with another single from the album, “Faded,” which lingered in the charts for several weeks.

The winner of Australian Idol got approached for The Young Divas early in 2006. Therefore, the group was founded. With “This Time I Know It’s For Real,” Kate DeAraugo, Paulini Curuenavuli, Emily Williams, and Rikki Lee Coulter had a tremendously successful debut hit.

The song stayed in the Top 100 charts for nearly eight months.

Soon after the single’s release, the group embarked on The Young Divas Live tour, playing for two weeks. However, it ended up staying three months due to sold-out crowds. The Young Divas later released a self-titled album that went double platinum.

After Rikki Lee departed the group and got replaced by Jessica Mauboy, the girls recorded their third album, “New Attitude,” which included the hit track “Turn Me Loose.” Unfortunately, the band split in 2008.

After the Band Disbandment

Since the Young Divas dissolved, DeAraugo had been performing in bars around Australia. In August 2010, she wanted to release her second studio album, but it didn’t release.

In a November 2011 interview about full-body liposuction, DeAraugo claimed that her second album was being held back from release, blaming it on her body image.

DeAraugo released a new track in February 2015 as part of the digital-only soundtrack for the film Dinosaur Island. In April 2015 that a new song, Shut Your Mouth released on May 1 of that year. DNA Songs co-wrote the track, which relates to a terrible moment in her life.

Police officers arrested DeAraugo twice in 2017 for possessing crystal methamphetamine, as well as a tomahawk and a huge knife.

On October 4, 2017, she appeared in court and stated that she would enter a guilty plea at her next court appearance on November 15, 2017. She faced up to 15 years in prison if convicted, but she avoided that fate.

After pleading guilty to eight counts, Kate served a 12-month community correction order at Bendigo Magistrates’ Court. She was also barred from driving for at least six months.

Nearly after three years in recovery.

It’s no secret that mental health, sadness, and addiction have all played a role in Kate’s life. She’s now three years sober and has claimed that her life has entirely changed, including a startling new professional choice.

A 36-year-old is starting in civil construction, learning how to handle large machinery and excavators and create things. Kate says, It’s quite odd, but she’s enjoying it.

Singer Kate DeAraugo keeps her personal life away from the limelight. She is quite active on Facebook, where she often posts some pictures. As for the other social media like Instagram and Twitter, she is completely inactive. Some of her recent posts are till 2015.

Nevertheless, some of her Facebook posts are with one guy; she might be dating him. However, nothing is officially confirmed yet.

Talking about her Networth, Even though Kate’s exact networth isn’t revealed, we believe she has gathered a massive sum of millions. Her estimated networth must be around $1 Million. She had a successful career going on until 2017.

The majority of her income was from her albums and the band’s Albums. In November 2005, her debut single, Maybe Tonight, peaked at number one on the ARIA Charts and earned certified platinum.

Her debut album, A Place I’ve Never Been, got certified platinum and debuted in December 2005.

For more articles on Singers, follow ALL STAR BIO.