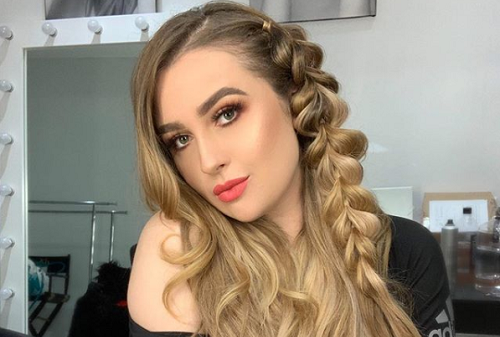 Kenia Ontiveros is a Mexican reality star as well as a beautician who earned the fame through her performance on the Mun2 reality series Larrymania. In addition, she also has her own makeup line and further sells her own lipstick line called Kenia.

With her charming beauty, Kenia earned a lot of fan following and has 1.9 Million followers on her Instagram account. Her well-wishers are eager to know in details about her personal life. So what is her relationship status?

Kenia Ontiveros was born on 17th June 1991 in Mexico. She is the daughter of José Raul Andrés Ontiveros Bahnsen (father) whereas her mother’s identity is still unknown. Ontiveros moved to the US along with her parents. Moreover, since her childhood, she was interested in makeup and fashion.

Who Is Kenia Ontiveros’ Husband? Know About Her Relationship

The 28 years old Kenia Ontiveros is a married woman. She got married to her longtime boyfriend Larry Hernandez, a Mexican-American singer, songwriter, and television personality. Larry met Kenia when she was 17 years old at that time Larry fell for the young beauty and eventually began dating.

Moreover, Larry got on his knee to propose Ontiveros on the Mun2 reality series Larrymania where she said ‘Yes.’ After Kenia accepted his proposal, the couple was waiting for Larry’s divorce as he was married to his first wife with whom he shares two sons Larry Hernandez Jr. and Sebastián Hernandez.

Though Larry was not divorced with his first wife, Kenia, and the Mexican-American singer continued their relationship and also welcomed their first child, a daughter Daleyza Hernandez on 25th September 2010. At the time of Kenia’s pregnancy, Larry’s first wife lived under the same roof.

Likewise, after three years of the birth of their first child, the girlfriend and boyfriend were blessed with their second child, a daughter Salary Hernandez on 23rd December 2013. However, Larry got arrested in 2015 due to kidnap and assault charges over a business dispute. Then Kenya began living as a single mother.

Later the singer became free from the custody and started to live his happy life along with his partner and daughters. In 2017, the parents of two kids exchanged the wedding vows in front of their family and friends.

As of now, the husband and wife are living a happy life without any sign of divorce.  Further, the couple visits different places on vacations.

The Mexican reality star Kenia Ontiverso’s net worth is estimated to be around $1 Million as of 2019. She sells her own makeup products named Kenia Beauty. As of now, she is the CEO of the Kenia Beauty and also a key member of Larrymania reality show from which she earns a decent amount of money.

In addition, Kenia also makes some satisfying income from endorsements, brand promotion, and other works. She earns $1040 to $1733 per post from her Instagram. So far, Kenia has posted over 5,718 times and has 1.9m followers.

A post shared by Kenia Ontiveros Hernandez (@keniaontiverosoficial) on Apr 4, 2019 at 4:28pm PDT

Apart from this, Kenia’s husband Larry Hernandez has a net worth of $10 Million as of 2019. The main source of his income is from his multiple careers as a Mexican-American singer, songwriter, and television personality. Further, he has released several albums including Contella Norteña, Mil Noches and so on. As of now, Kenia and her husband are living a luxurious life along with their kids.

Kenia’s age is 28 years as of 2019. She stands at the tall height of 5 feet 11 inches which is similar to that of Russian-American boxer Charlie Zelenoff. She weighs around 50kg. In addition, she has a pair of hazel eyes and light brown hair.

However, the beauty guru has not shared her exact body measurements. But despite being a mother of two children she has maintained a curvy body figure.