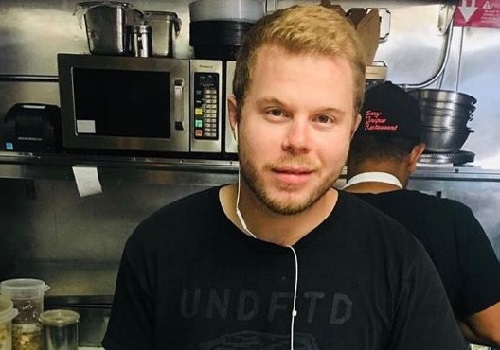 Max Todd is an American actor famous for his roles in Nightman and The Real Housewives of Beverly Hills. Rather than for his career, Todd is mainly known as an adopted child of Lisa Vanderpump and Ken Todd. His mother, Lisa, is a British restaurateur featured on Bravo’s Beverly Hills  Real Housewives.

Todd’s parents own 35 restaurants, clubs, and bars. Max once hooked up with the reality star Billie Lee and spent quality time together. Are they still together?

Max Todd was born on 7th December 1991 in England. His sun sign is Sagittarius. Todd belongs to white ethnicity and holds British nationality. He was adopted by the British restaurateur Lisa Vanderpump when he was only six months old by his foster parents.

Similarly, his adoptive father is Ken Todd. Furthermore, he also has an elder sibling, a sister named Pandora and a step-brother named Warren, his stepson of Lisa.

Todd moved to California after his graduation to join the music institute and follow his music passion. Additionally, according to his mother, Lisa, he was a troublemaker as a teenager.

The 27-year-old star Max Todd dated Billie Lee, a reality TV star. In May 2019, several online tabloids revealed Todd and Billie dating each other. During the reunion of Vanderpump Rules‘ Season 7,  it was revealed that Lisa’s son Todd and Billie have hooked up.

Lisa mentioned that her son said, ‘She’s a pretty girl, Mom. We had fun together. What’s the big deal?’ Similarly, Billi said she didn’t know she had to tell her boss that she was sleeping with Lisa’s son Todd. Shortly, Lisa further asked if Billi was sleeping with Todd.

Well, Billi replied, “It was a drunken night. It was fun. He’s cute; I like him; we’re friends.” Whatever the fact is, The duo were spotted together enjoying their time at the party. Nevertheless, neither Todd nor Billy was officially confirmed to be dating each other.

Likewise, they aren’t spotted hanging out together in public these days. Similarly, they haven’t shared any other pictures on their respective social account. Thus, we cannot be sure whether they are dating.

Max Todd is a rising star. He has followed in the footstep of his mother and has just stepped into the entertainment industry. So far, Todd has made only two big-screen appearances on Nightman (2018) and The Real Housewives of Beverly Hills. Todd starred along with his mother, Ariana Madix, Kyle Richards, and others.

Probably he received good payrolls for his portrayals. Todd’s net worth is estimated to be around $500 thousand as of 2019. He has a long way to go in his career. Thus, his income will undoubtfully rise in the coming days. On the other hand, his mother Lisa’s net worth is  $75 million.

Moreover, she receives a salary of $500,000 per season of Real Housewives of Beverly Hills. In the same way, Todd’s father also summons an astonishing amount of money from the business. Thus being the son of wealthy parents, Todd undoubtedly lives a lavish life relishing his parents’ income.

Todd is an actor credited for Nightman (2018) and The Real Housewives of Beverly Hills (2010). Besides this, his mother, Lisa Vanderpump, is a British restaurateur and a TV personality. Likewise, his father, Ken Todd, is a businessman.