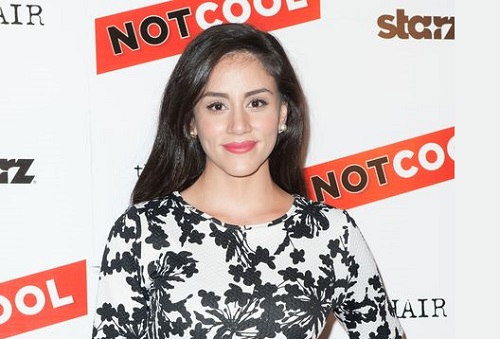 Have you ever watched the American crime drama television series, Gotham? If yes, then you might know the American actress Michelle Veintimilla who played the role of Firefly. Not only it but the actress further performed in the Broadway musical The Visit in the Spring in 2015.

The 26 years old actress Michelle is currently in a romantic relationship with her boyfriend Eddy Lee. The lovebirds began dating in 2018.

Who Is Michelle Veintimilla? Bio & Wiki

Michelle Veintimilla was born on November 7, 1992, in New York under the birth sign Scorpio. She grew up along with her younger brother Jose Vintimilla. Further, Veintimilla frequently shares pictures of her parents on her social media however the details of her mother and father is unknown.

As per her nationality, Michelle is American and belongs to white ethnicity. She went to Carnegie Mellon University.

Is Michelle Veintimilla Married Or Dating Anyone?

The 26 years old actress Michelle Veintimilla is neither married nor single. As of now, she is in a romantic relationship with her partner Eddy Lee who is a Korean-Canadian actor. Observing their Instagram account, it seems like the lovebirds are together since 2018 however the exact date is unknown.

This weekend.. ☁️ ✨ thank you for capturing this sweet mo @erallphotography

In addition, Michelle and her boyfriend are happily enjoying each other’s company. The duo often travels to different places on vacations. Furthermore, on 25th October 2018, Veintimilla shared the picture with her lover with a hearts emoji.

Veintimilla not only shares pictures of her boyfriend but she also uploads photos of her friends, co-star and her family on her Instagram account.

As of now, the actress is living a happy life along with her boyfriend. Apart from this, there is no other information about her past affairs.

What Is Michelle Veintimilla’s Net Worth?

The famous American actress Michelle Veintimillas earns a handsome amount of money from her career. Being involved in the entertainment industry since 2007 there is no doubt that she accumulated a hefty fortune. Veintimilla’s net worth is $1 Million as of 2019.

Furthermore, Veintimilla earns an average salary of around $49,986 per year. Veintimilla played in several movies and TV series which are doing really good in the industry. One of her films Loves the Coopers was made on the budget of $17–24 million and collected $42.4 million on the box office. In the film, she starred along with Alan Arkin, John Goodman, Ed Helms, and others.

Currently, Veintimilla stars in The Baker & the Beauty along with Nathalie Kelley, Victor Rasuk, and others. As she is still active in the industry, her net worth is bound to increase in the upcoming days.

Michelle Veintimilla began her career at the age of 15, playing in American soap opera One Life to Live. After that when Veintimilla was studying at Carnegie Mellon University she got a chance to perform in the musical The Visit in 2014. The same year she also played in Those Who Kill and also in romantic comedy film Not Cool.

Veintimilla then played in the several film and TV series including The Good Wife, Blue Bloods, Limitless and so on. The same year she played in an American crime drama television series Gotham alongside Ben McKenzie, Donal Logue, David Mazouz, etc. As of now, Veintimilla plays in American romantic musical comedy-drama series The Baker & the Beauty.