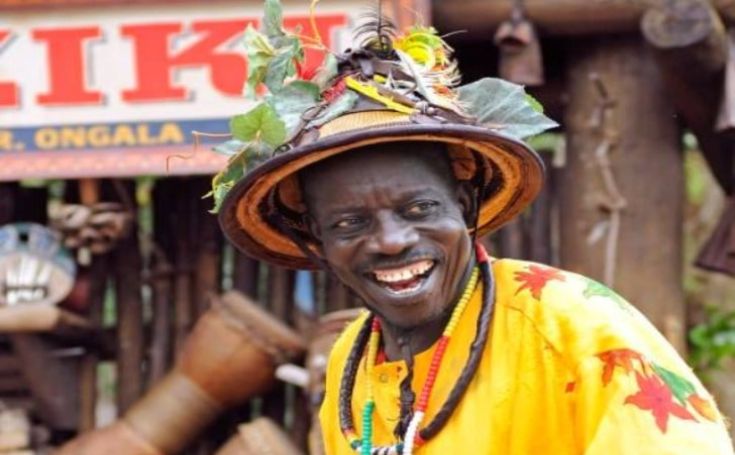 Mor Dogo Thiam is a Senegalese drummer and art historian who rose to stardom working on many songs, including Sindiely, Kele Mumbai, Ayo Ayo Nene, Xamleen Xamme, and many more.

Moreover, in the Join Us (1999) album drummer is enlightened by the cultures of Senegal Wolof and his ancestors and family used to narrate their stories using drums.

Also, he is the father of a well-known personality in the entertainment industry, Aliaune Badara Thiam, professionally known as Akon.

Please scroll down and read the entire article and collect all the data relating to this talented person’s life.

The Kanfera drummer, Mor was born on 22 May 1941 in Kaolack, Dakar Senegal. Further, his surname is pronounced Chahm. Sadly, he hasn’t revealed further details regarding his family, siblings, and early childhood in the media.

Born to a Toucouleur family of Quranic scholars and a talibé of Daara schools, the man began his career as a mechanic on the Dioran boat in Lindian outside Kaolack.

At the same time, the Lindian boat traveled across West Africa and Europe for nine months. During his three-month vacation, Mor would spend his time drumming with the Théatre National Daniel Sorano in Dakar.

When Did The Back to Africa Instrumentalist Marry?

Even though the music celebrity has not revealed their marriage date yet, he probably married in 1972.

The African dance teacher who taught at East St. Louis moved to the USA in 1972 and gave birth to her first baby in April 1973. Accordingly, it is clear from these dates that the charitable Senegalese woman married in 1972.

In the year 2009, he made the Hajj pilgrimage to Mecca and devoted his life to the development of Darou Khafour and building the Mor Thiam Learning Center International School (MTLC).

Besides, the drummer resides between Orlando, Florida and Dakar, Senegal.

Who Is The Spouse of Sindiely Rhythmist, More Thiam? How Many Kids Do They Have?

The Performing Arts Training Center tutor, Kine Gueye Thiam, is a culture lover and works for a better home and life for the Senegalese immigrants in the USA.

Likewise, Mrs. Thiam has also served with Katherine Dunham, a legendary choreographer, at Katherine Dunham. Presently, the community business leader works as a CEO with her son at Konfidence Foundation.

All the juveniles of the devoted couple are grown up and are working in their respective fields. In addition to this, the couple moved to their hometown Dakar, Senegal, West Africa, soon after Akon was born and lived there for seven years.

The twosome moved back to the United States and settled down in Jersey City along with their family.

Who Are The Children of Kele Kumbana Drummer, More Dojo Thiam?

The Bananza singer, Aliaume Damala Badara Thiam, known mononymously as Akon, is the eldest child of the Thiam family.

He is a Senegalese American singer, songwriter, record producer, entrepreneur, and traditional jazz musician. The ASCAP Award holder first stepped onto this earth on 16 April 1973 in St. Louis, Missouri.

Furthermore, the talented singer rose to prominence in 2004 following the release of Locked Up, the first single from his debut album Trouble, followed by the second single Lonely.

Meanwhile, his brother Abou took birth on 25 March 1982, in New Jersey, United States. and is a business professional as well as a music creator.

The music producer came to prominence after being the youngest person to be named Vice President of A&R at Def Jam Records.

Indeed. Mor Dogo Thiam has six grandchildren from his eldest son, Akon. Aliaume walked down the aisle with his longtime sweetheart, Tomeka Thiam.

Similarly, Ty Pittman is the son of the Right Now singer Akon with his ex-partner, Kelly Pittman, and Mohammad’ Mo’ Thiam is another son from his next wife, whose name is still under review.

The popular entertainer Dogo’s married life is still strong, and the lovebird is ready to last it to their last breath. There is no gossip concerning their split up.

The perfect love couple lives happily with their family in Orlando, Florida.

The Ayo Ayo Nene Drummer, Thiam, has gained a handsome income from his long successful career and has been active in this field for over four decades.

According to some sources, the wealthiest drummer listed on the most famous drummer’s net worth is about $4.69Million. Mor has not shared his specific salary, income, and assets details with the public.

Similarly, his primary source of income is a professional drummer. Besides, he received awards for his service to African culture, including recognition by the U.S. State Department in Washington D.C., the United Nations; the State Department of Indonesia; and the Trinidad & Tobago Minister of Culture.

Also, the star received a Lifetime Ambassador Award from Disney.

On the other side, his beloved wife, Kine, is a professional dancer and has served as a dancer for several years. Meanwhile, the woman has a good net worth.

But, she is the mother of a celebrity; her son, Akon, has a net worth of 80 million dollars which he collects from his versatile career. The central portion of his fortune comes from movies, concerts, tours, sponsorship, album sales, etc.

Also, Akon has a clothing line called Konvict Clothing, which he started in 2008 and has several record labels. Additionally, he owns a diamond mine in South Africa. Another American Drummer, Sean Waugaman, has a net worth of $1.5 million.

Hence, undoubtedly, the drummer lives a luxurious life with his family.