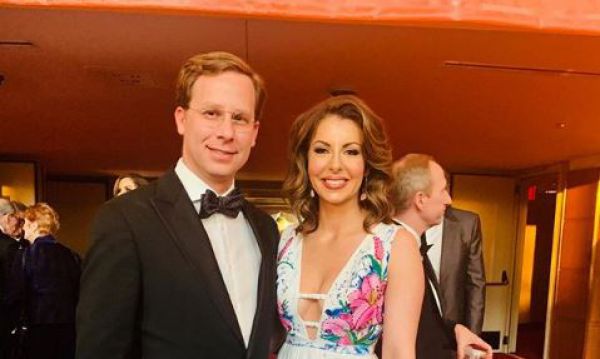 Despite claiming one of the highest position in US Government official, Morgan Ortagus knows how to balance work and her married life. Yes, she married a man named Jonathan Weinberger for a long time now.

Everybody is curious to know about the lady who claimed one of the highest position in the U.S. Government. Ortagus popularity soared up after appointed as the spokesperson for the US Department of State by President Donald Trump.

The spokesperson married Jonathan Weinberger on May 25, 2013. Ortagus wedding was one of the talked events as it was officiated by Judge Ruth Bader Ginsburg. The couple both have a fair share of Government working experience.

Jonathan previously worked as a White House associate general and executive secretary on Trade. Not just that, Weinberger also served as the Secretary to the US Treasury Department. As of now, Ortagus’s spouse works as the vice-president of Veedims, LLC which is a software company.

On the other hand, Ortagus worked at Fox News, USAID, US treasury Department, and Standard Chartered Bank. Besides that, she is currently the founder of Global Opportunity Advisors (GO) and is also the US Navy Reserve force while holding the spokesperson position.

The couple lives in a happy married life as of now and with time their bond is getting more and more stronger. Besides that, they are not thinking of having children any time soon as the pair wants to allocate all the time for each other.

The duo celebrated their big day in a Jewish tradition and was quite fancy despite being an intimate affair.

Morgan Ortagus asked associate Justice Ruth Bader Ginsburg to officiate their intimate wedding. Furthermore, they also celebrated the wedding in Jewish tradition which was blessed by Rabbi Kenneth B. Block.

The event took place at the Four Seasons Hotel in Georgetown and the couple exchanged the wedding vows in front of family and friends. For the auspicious day, Ortagus walked the aisle in a beautiful red gown and also danced with her spouse in Lady in Red song.

Likewise, Jonathan appeared in a dashing black suit and the couple complemented each other very well. Recently, on May 25, 2019, the pair celebrated their sixth wedding anniversary. Ortagus also celebrated Jonathan’s 42nd birthday recently.

For your information, their fifth anniversary was also quite special as Ortagus wrote in her Twitter,

“Hubby @jrw611 and I both forgot it was our anniversary this morning until my sister called me to wish us a happy anniversary. Today is 5 years and my sweet little doggies are still going strong too!”

Prior to tying the knot with Jonathan, Ortagus exchanged wedding vows with a guy named Joshua Dobbs. Dobbs works in a US Marine but any details regarding their marriage are not known.

They went out on a date after meeting each other in Polk County, Florida. After some time of their marital life, the couple filed for divorce and decided to end it but the reasons for the split is not disclosed. As of now, Ortagus is happy with Jonathan and is not surrounded by any rumors or controversies.