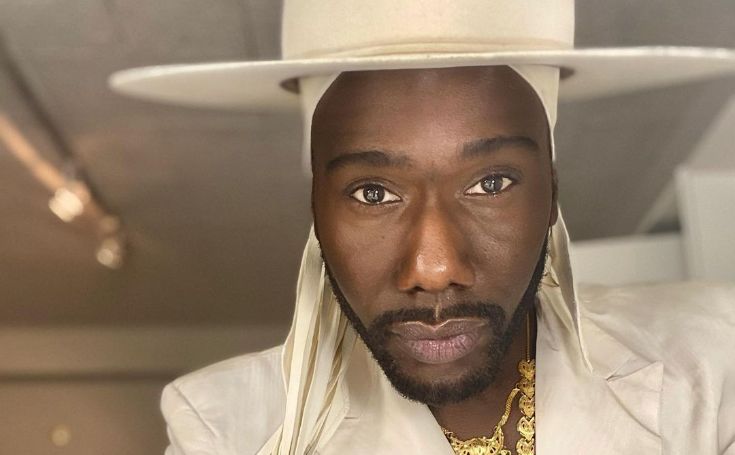 Nicco Annan is an American actor better known as Uncle Clifford’s role in the movie P-Valley, an adaption of the Katori Hall play Pussy Valley. Annan is making quite a mark in the entertainment industry through his natural acting and exceptional performances in movies like Demons.

Apart from his undertaking career, he is also a dancer, choreographer, and producer; however, the fine combination of entertainment skills is reputed to be gay. Is it true? Well, know all the information about his relationship in the article below:

Likewise, he is the son of Sandra Nicco Annan, but his father’s identity is still a mystery to the internet.

Similarly, his mother played a big role in raising him, and Nicco even said, “he is lucky to have a mother like her.” He loves his parents and share photo of them on his Instagram.

And he has a sister named Kellee Stewart. Additionally, Annan went to Purchase College, the State University of New York, for his education.

The TV personality Annan is new in the film industry and focused on projects other than TV Series. Further, he had shown his talent in various popular series like This is Us, All About the Afterglow, and Half Sisters.

Firstly, the star worked as a choreographer in the TV show This is Us, an American romantic family drama series, and then he got a chance to act in an episode of This is Us in 2018 produced by Dan Fogelman.

Likewise, he played the role of Mr. Davis in the third season of This is Us and later starred as Uncle Clifford in P-Valley in early 2020. P-Valley is an American drama television series issued in early 2020, which shows the lives of several dancers working at strip clubs in the Mississippi Delta created by Katori Hall.

And Nicco stated that as a black gay man, he was happy to portray the character of Uncle Clifford in the P-Valley series.

More on his career!

Besides acting, the actor also worked as a director, dancer, and choreographer in the theatre and television industry, appearing in several movies like Next Stop, August ninth, Demons, Little Cousin, All about the Afterglow, and many others.

Also, he featured in TV shows like Smosh, Half Sisters, Shameless, This is Us, Snowfall, and P-Valley. More than that, Annan was part of the commercial dance training program Motivating Excellence as a theatrical director.

Last but not least, he worked as a dancer and choreographer before making a name in the acting industry.

Nicco Rumored To Be Gay: Is It True? Know About His Current Relationship Status.

The 32 years old talented dancer is very secretive about his personal life and prefers to keep everything under the wrap. Even he is pretty active in social media accounts, and there aren’t any pictures and information about his relationship.

Many have mistaken his on-screen romance for real because Nicco made his relationship quite realistic in the movie. And they were so real that their fans and followers thought that they’d started something in real life.

On the other side, Nicco is rumored to be gay. With no girlfriend and affairs to date, fans are speculating that he might be gay.

But there has never been proper evidence to prove the rumor. Since the choreographer has never been spotted being intimate with any guy in public, it is completely wrong to tell him gay.

How Much is Nicco Annan’s Net Worth?

The P-Valley actor has gathered a decent amount of net worth throughout his multiple professional careers. As of 2021, Nicco has a net worth of $850thousand, and he is growing his net worth every day.

And, the star has played in numerous television series, movies, and TV shows, which helped him collect a fortune.

Annan is one of the busiest and richest actors in the Hollywood industry and has acquired a lot of publicity and appreciation from his fans.

Furthermore, he has collected such fortune as a dancer, director, and choreographer.

FollowAllStarBio, for more articles on actors, dancers, producers, and choreographers.