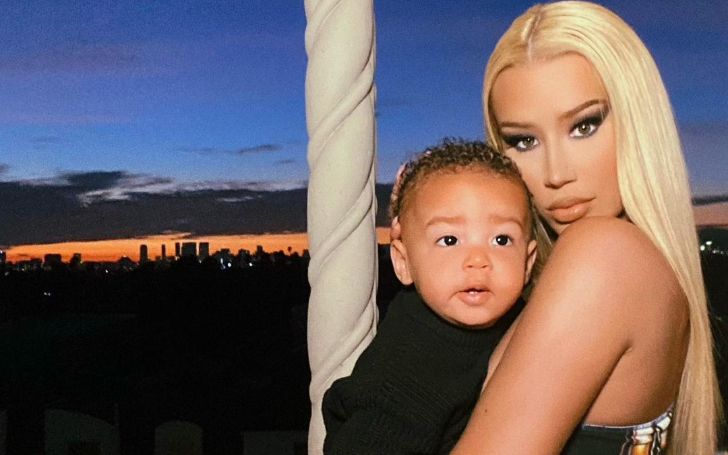 Onyx Kelly is the son of Australian artist Amethyst Amelia Kelly and American  Jordan Terrell Carter. This cute little kid is just one year old and is already in the spotlight.

Further, Grab every bit of detail about this child and his parents in this article! Firstly, let us dig into Kelly’s mother, Amethyst Amelia Kelly.

Iggy Azalea is the professional name of Amethyst Amelia Kelly. She is an incredible Aussie rapper, singer-songwriter, and gorgeous model. Azalea rose to prominence after releasing music videos for her songs “Pussy” and “Two Times” on YouTube.

Amethyst Amelia Kelly was born on the 7th of June, 1990, in Sydney, Australia. Azalea grew up in Mullumbimby, New South Wales, with her father, painter and comic artist Brendan Kelly, and mother, hotel maid Tanya.

Despite being Australian, Azalea raps with a Southern American accent. She is one of the hip-hop scenes with few growing female MCs. However, as a white girl from rural Australia, Aussie rapper has freely admitted to being an outsider in the world of rap.

Playboi Carti is the professional name of Jordan Terrel Carti. He is a dope American rapper and singer-songwriter. Jordan is known for his avant-garde musical style, gothic wardrobe, and cryptic public presence. He rose to prominence in 2015 with his song Broke Boi.

Playboi Carti was born on September 13, 1996, in Atlanta, Georgia. Carti’s music has been described as playful, hard-hitting, and incredibly melodic, and he has been called a mumble rapper.

He is well-known for his baby voice approach, in which his voice reaches high registers with shaky pronunciations and frenzied cadences. Carter was ranked one of the hip-highest-paid hop’s figures in 2017, reportedly earning more than $8 million in a year.

Rappers Iggy and Carti started dating in 2018 when Carti was on tour. The pair were very much in love. Therefore, Carti shared Once she started talking to her, she just cut off everybody.

However, their relationship was strictly personal and did not involve working on music together. Iggy moved in with Carti at the end of 2018 in his hometown of Atlanta.

The couple has been in an on-and-off relationship since 2019. The romance lasted until December 2019, when Iggy Azalea announced on Instagram that she was now single.

They subsequently reconciled after having their first child together, son Onyx. Onyx was born on May 28, 2020. However, things between the two heated up during Christmas 2020.

At that time, Onyx was just a 9-month-old baby, and Azalea said that Carter spent Christmas Day celebrating the release of his second studio album, Whole Lotta Red, rather than spending time with his family.

The Aussie rapper Iggy first mentioned their split in an Instagram post on October 24, writing, “You lost a real 1,” and adding, “People take loyalty for granted & that’s why I’d rather be alone.

As splitting rumors circulated, Iggy went back on social media to clarify that she had split from Playboi Carti. She said that she was raising her son alone and was not in a relationship.

Furthermore, Onyx’s mother clarifies that Playboi is a part of Onyx’s life on oct 26,2020. She posted on her Instagram story claiming that Playboi isn’t completely missing from their child’s life.

Nothing she said was meant to imply that her son’s father isn’t involved in his life, but she noticed many people read it that way, so Iggy wanted to clear the air. So she added, “Onyx is very loved by his father and has always had both parents in his life since day one.”

Fans should not expect a reconciliation anytime soon because, seeing her IG story posts, a gracious mother stated she is not looking to rekindle her relationship with Carti. Iggy wants to be the best mother she can be.

It’s unfortunate, but it is what it is, and she must move on since failing to do so will stifle her progress. Azalea was and continues to be a very happy and proud single mother.

Although it is not the outcome that many fans had hoped for, it appears that this is the best decision for Iggy Azalea and her kid.

She holds a Networth of $15 million. Not to mention, Aussie rapper azalea has amassed this massive sum through her career in the music industry spanning more than a  decade. She has been nominated for 128 awards and has won 39 of them.

Singer Iggy began her music career in 2006. She first worked with a member of the rap collective Dungeon Family named Backbone. Meanwhile, Kelly met someone from Interscope Records who convinced her to move to Los Angeles in 2010.

In addition, Iggy initially resisted suggestions to try modeling. After that, she signed with Wilhelmina Models International that year and was dubbed the new face of Levi’s jeans.

Kelly also featured in promotional ads for Los Angeles-based lifestyle brand Dim Mak’s 2012 fall/winter collection. She agreed to be the 100th-birthday ambassador for Bonds, an Australian underwear and clothing company, in April 2015.

American rapper Playboi Carti has a net worth of $9 million. He was one of the hip-highest-paid hop’s figures in 2017, reportedly earning more than $8 million in a year. A 25-year-old Carter stepped into the music industry in 2011.

Before rapping, Carti aspired to be an NBA star. He was a member of the high school squad before leaving due to a disagreement with his head coach. Playboi Carti frequently missed school lessons to work on his music or go to H&M. He quit his job to pursue music.

In addition to his music career, Rapper Carti modeled for Louis Vuitton, Kanye West’s Yeezy Season 5, VFiles, and Drake’s OVO Lookbook, alongside Ian Connor and John Ross. He appeared in a Nike Inc. ad and walked the runway for Virgil Abloh and his brand Off-White.