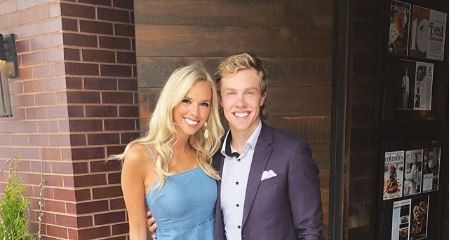 The American professional Ice hockey player Ryan Dzingel is already taken. Is he married? Well, no he is not married yet but he got engaged to Elise Lobb.

If you want to know more about this cute couple then you are in the right place. So, now let’s together unzip the couples relationship status.

Ryan Dzingel and Elise Lobb Engaged…Know more about it

Yes, you heard it right. Ryan Dzingel and Elise Lobb got engaged in 2019. The couple took their relationship to the next level by putting the ring in each other finger on January 26, 2019. Ryan plays for Ottawa Senators after being drafted by the team in the seventh round of NHL Draft in 2011.

On January 26, 2019, Ryan Dzingel surprised his longtime girlfriend Elise Lobb by proposing her. The 27-year-old proposed his love by the poolside by getting down on one knee with a ring in his right hand. Elise could not control her tears as she said, ‘Yes’ to the Ottawa player.

In the picture posted on Instagram about the proposal, Lobb wrote,

“Yes!!!!! you are all that I prayed for and more. Best Day Of My Life!!! I can’t wait for a lifetime of adventures with you by my side! I love you more than I can put into words!!!”

For a special occasion, Ryan dressed in a blue checked suit with a white shirt to go with it. On the other hand, Elise looked stunning in her creamed color dress and looked perfect for the occasion. Elise Lobb works as a model, TV Reporter, and Sports Journalist.

Not just that, Lobb plays golf really well and she is actually a professional. Lobb participated in many golf tournaments in her college days. Besides that, Elise Lobb is also a social media personality as she runs her own YouTube channel.

When are they going to get Married?

The pair Showered their love at their engagement but have not announced their wedding plans yet. Ryan and Elise are head over heels in love with each other and we all think the auspicious day is very near.

All the fans of the 27-year-old couple are waiting eagerly for the big day. We can already imagine the love floating in the air at their wedding.

Ryan Dzingel and Elise Lobb. How did they meet each other?

Elise and Ryan have stayed tight-lipped on how they meet each other for the first time. Even though we don’t know the date, the pair holds an amazing memory of that day. The couple went on a date with each other and now are engaged. It sure was a special day.

Elise shows her love on social media as she is very active on the platform. On August 25, 2018, Lobb wrote,

“How is it possible that one person can bring so much joy into another person life? Dis in the picture is my world.”

Furthermore, on Valentine’s Day, Elise posted a picture on Instagram and wrote,

“Happy Valentine’s Day to my best friend, 2 man scramble partner, fiance and most hardworking and loving person I know! I love You!”

In conclusion, we can only say that the lovely couple is in cloud 9 and soon they will announce their wedding day. Besides that, the couple focuses on their work and so far managed to stay away from any rumors or controversies.