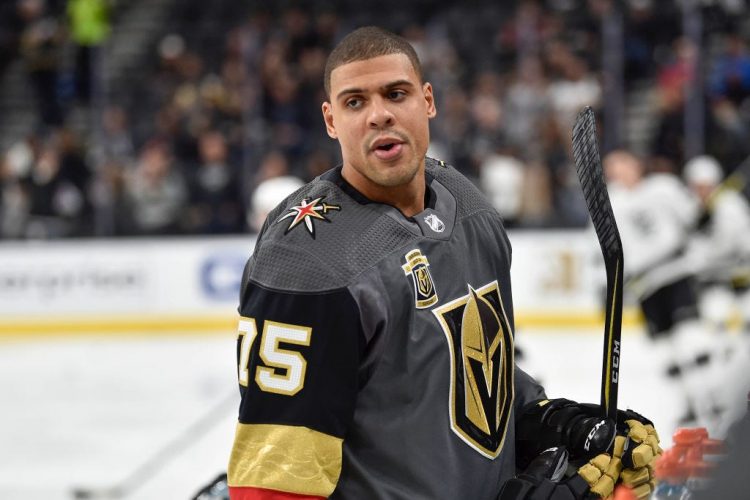 Today’s topic is about a sports personality who got into the field of sports following the footsteps of his father. He is non-other than Canadian-American Ice Hockey player Ryan Reaves. Ryan is a professional ice hockey right winger for the Vegas Golden Knights of the National Hockey League (NHL). However, his teammates call him enforcer for his aggressive nature on the pitch.

Ryan further belongs to the family of sports lovers since his Dad Willard Reaves played in the Canadian Football League (CFL). In addition, his brother Jordan Reaves plays Ice Hockey for the Saskatchewan Roughriders. To find out more about Ryan, read the article below:

Reaves was born to Dad  Willard Reaves and Mother Brenda Reaves on January 20, 1987, in Winnipeg, Manitoba, Canada. He is Canadian by nationality.

Regarding his academics, he attended St. John’s-Ravenscourt School. Soon after he completed his education, Ryan started his playing career during his school days. He played in the Quebec ice hockey tournament, which is an under 12 hockey tournament held in Quebec city. The event is held to pick the future professional hockey player.

Ryan further debuted professionally on October 11, 2010, and scored his first NHL goal in January 2011 against the Ducks. After that, on June 23, 2017, he joined Pittsburgh Penguins in the 2017 NHL Entry Draft. Later in February 2018, he moved to the Vegas Golden Knights and scored the most important goal. Reaves scored a series-winning goal over the Winnipeg Jets that qualified the Golden Knights for the 2018 Stanley Cup Finals. Furthermore, he also scored in Game of the Stanley Cup Finals in a 6-4 Golden Knights victory. In addition, on July 1st, 2019, Ryan signed a 2-year contract with the Golden Knights.

Ryan married Alanna Forsyth in a private ceremony on August 16, 2014, in his Hometown Winnipeg, Manitoba. The couple walked down the aisle among their friends and family members in The Fairmont Winnipeg.

Alanna’s looked gorgeous in a  white sweetheart neckline gown, but until the marriage date, no one knew about Ryan’s dress color. Ultimately, Ryan surprised his bride by wearing a matching Gold Jacket. The couple looked happy on their marriage day. Likewise, Alanna describes the moment as the most memorable one.

For their marriage, the couple decided to use Alanna’s favorite color, Black. But too often the wedding palette they went on to use pink and Golden as their wedding colors to create classic looks. The wedding venue, moreover, was also decorated with candles, which created a cozy and romantic atmosphere.

As of 2019, the couple is blessed with the baby boy name Kane Reaves. The lovebirds somehow manage to keep their kid far from the limelight.

Net Worth of $3 Million

Ryan Reaves’s net worth is around $3 million, which he accumulated from his playing career as a Hockey Player. The 32-year-old player started his career from 2007 since then until 2010; he earned $1,57,500 as a total salary. He also played for St Louis Blues during that period. After playing for three years, his contract extended for three times until 2017/18 at St Louis. During that time, his earnings were:

Apart from his earnings, he owns a house in Las Vegas.