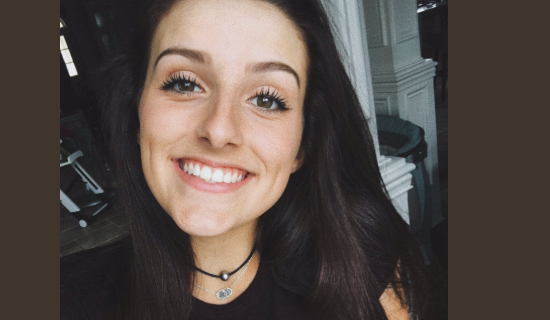 Like many celebrity kids who gain fame because of their parents, today’s topic is also about a similar kid who gained stardom after being born in a celebrity family. She is a passionate amateur horse racer, Savannah Blackstock.

Savannah is the eldest daughter of the famous music manager Brandon Blackstock, and his ex-wife, Melissa Ashworth, an actress. Moreover, Savannah also received public attention as the stepdaughter of the popular singer Kelly Clarkson.

To know more about Savannah, continue reading the article below.

On June 7, 2002, Savannah Blackstock was born to her famous parents, Brandon Blackstock and Melissa White. She grew up in Nashville, Tennesse as the eldest daughter of the ex-couple. Savannah has a sibling, a brother, Seth Blackstock. Since she gained fame because of her dad’s marriage, there is not much information about her profession.

Currently, Savannah is 20 years old. There has been no rumor of her affair with anyone until now. She seems to be enjoying her life rather than engaging herself in other things except horse racing. The eldest daughter of Brandon is a passionate horse racer, as per her Instagram post.

Savannah Blackstock was an unknown name to the public until some time. However, she received media attention after her dad, Brandon, married the popular American singer Kelly Clarkson in 2013. Kelly is the stepmother of Savannah from her husband’s earlier marriage to Melissa White. Despite being a stepmom, Kelly treats Savannah and her brother like her own children. She also mentioned in an interview that she has four children, including her two kids, Savannah and Seth.

Nevertheless, Kelly Clarkson is an American singer, songwriter and television personality. She rose to fame in 2002 after winning the first season of American Idol. Some of her popular songs are Stronger, Since You Have Been Gone, Because Of You and many more. Savannah’s stepmom has won three Grammys, three TV Video Music Awards and Four American Awards. In addition, she was named ‘one of the pop greatest singers by Billboard. There is no doubt about Savannah’s sudden rise to fame because of her popular stepmom, Kelly.

Savannah’s biological parents divorced in 2012 following complications in their marriage. However, Brandon had already known Kelly during the 2006 American Country Music Awards. Brandon’s father and mother worked for Kelly as a manager and mentor. It was Brandon’s dad who introduced his son to Kelly. Despite that, nothing magical happened between them because Savannah’s dad was married to her mother.

However, they had different plans for Kelly and Brandon since they met again in 2012. Brandon was managing “America the Beautiful” performer Blake Shelton. Kelly was also performing at the Super Bowl, due to which they came face to face again after six years. In an interview with Ellen Degeneres, Kelly said she wanted to end up with Brandon because of his witty nature. Later, the couple started dating on February 11, 2012. The couple dated for nine-month before Brandon proposed to Kelly with a yellow canary diamond ring on December 14, 2012.

On October 20, 2013, Clarkson and her fiancé became Mr. and Mrs. Blackstock. The happy couple tied the knot at Blackberry Farms in Tennessee in the presence of his kids, Savannah and Seth. As of now, Kelly is a mother of four beautiful children, among which she mothers two of her kids; a daughter, River Rose Blackstock and a son, Remington Blackstock.

Savannah’s love for the horses is beyond imagination. The eldest daughter of Brandon is a passionate horse racer, as per her Instagram post. Savannah named her horse Garryndruig Albie. She recently got a gift from her dad, a red horse. She uploaded a picture on her Twitter account and thanked her dad, Brandon, for the gift.

In addition, she can’t imagine her life without the horse and considers it the best animal. Her Instagram is filled with pictures of her riding horses.

The details about Savannah Blackstock’s profession are currently not mentioned. Her net worth is under wrap as of 2022. However, she lives a lavish life with her millionaire parents.

In addition, her dad, Brandon, has a total net worth of $5 million at present. He is a successful businessman, pilot, former talent manager, and Starstruck’s management company CEO. Some of his notable work on television includes Blake Shelton Live: It’s All About Tonight (2010) and The Kelly Clarkson Show (2019).

Besides that, her stepmother has a total net worth of $45 million as 2022. She accumulated this amount from her career as a singer, performer and reality show Judge. In addition, there is no doubt Savannah will hold her net worth in the upcoming future.