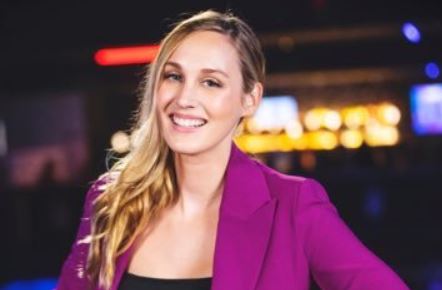 If you are a fan of E-sports, you probably know about the League of Legends European championship; you must be familiar with a beautiful host of the championship series Sjokz. She is a Belgian television presenter, reporter, esports player and beauty pageant contestant. She gained fame after winning the 2009 Aardbeienprinses van Beervelde pageant title and a third-place finalist in the 2011 Miss Style Belgium pageant.

Moreover, Sjokz won the “Best Esports Host” award at The Game Awards in 2018. What are her current relationship status and net worth apart from her professional life?

Sjokz born as Eefje Depoortere on June 16, 1987, in Sint-Andries, Bruges, Belgium. She grew up most of her life in the Belgian province of Sint-Andres, known as the city of small castles. She attended Ghent University and graduated with a degree in History and Journalism. In addition, she received a master’s in Teachers’ degree just because she wasn’t aware of what she was doing in her life.

Nevertheless, her interest grew in gaming early on, and she spent hours playing it. Her first game was Tomb Raider 3. After completing college, she had a keen interest in becoming a sportswriter because of her love for football and tennis. However, she changed her decision after she saw the trend of writing articles about computer gaming and decided to write about the League. During her time at University, poker was a popular game, to which she thought to write about League rather than focusing on traditional sports.

Is she married or single?

As of 2020, Sjokz is probably single since there are no rumors of her relationship. Moreover, her social media handler does not reveal anyone that could be close to the journalist. Unlike many girls who use their Instagram accounts to show their belongingness and relationship, her account is filled with pictures of her works. Moreover, she is mostly active on Twitter, and even there, we can’t find any signs of her partner. Saying that, there is no doubt the beautiful Belgian will eventually find a perfect match because of her talent and surpassing looks.

Besides, Sjokz is very close to one of the Spanish players, X Peke, who competes in the European League of Legends Championship Series. Their mesmerizing chemistry is loved by most of their fans. Sjokz and xPeke have an inevitable bond beyond the European gaming scores. However, the duos haven’t confronted their relationship in public. It could be that she knows to keep her personal life away from the limelight. And, Sjokz often teases her fans via Twitter. Once, the Belgium beauty tweeted in her own words:

Despite that, it doesn’t hint at anyone that we could assume to be her boyfriend. Hence, she might be single for now.

Sjokz has a net worth of an estimated $1 million from her career as a host. Although the exact amount of her earnings are not available, League of legend players earns up to $15,000 as salary. That amount doesn’t include the prize money. The amount of money a league legend champion can grab up to $25,000 to $35,000, depending upon the sponsors and events category. Top players such as Lilchiipmunk, Emmahdorable, and xChocobars hit around $300,000 annually.

Likewise, Skojz must earn around  €52,188 and €91,801 as a reporter, which is also the average salary for a Belgian reporter. As of now, Sjokz lives a lavish life, as her Instagram pictures suggest. Her Instagram is filled with her works or herself partying and traveling with her friends.