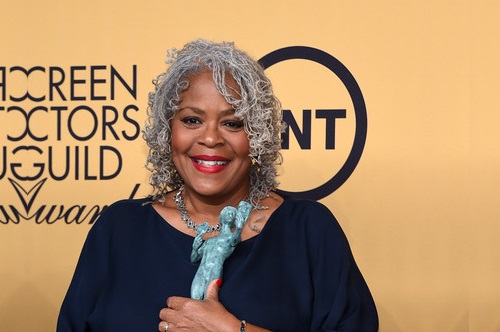 Likewise, 62 years old Yvette is a married woman. Freeman married her husband Lanny Hartley on 27th January 1996. Does she share any children with her husband?

Who Is Yvette Freeman? Bio & Wiki

The prominent actress, Yvette Freeman was born on 1st October 1957 in Wilmington, Delaware, the USA. Her birth sign is Libra. Likewise, she belongs to Afro-American ethnicity and holds American nationality. Unfortunately, there is no information about her early life and family background.

Freeman attended the University of Delaware and graduated with a major in Art and Theatre.

Yvette started her career as a graphic designer. Later she turned her career into acting on stage productions appearing on The Wiz and Ain’t Misbehavin‘. At the same time, she also worked as a singer in nightclubs. Later, Freeman began appearing on television shows like Tales from the Crypt, Knots Landing, and L.A. Law.

Freeman rose to fame after she played the role of Haleh Adams, a registered nurse, on the NBC medical drama series, ER alongside Sherry Stringfield, Noah Wyle, Laura Innes, etc. Similarly, she appeared on the NBC sitcom, Working from 1997 to 1999.

Freeman is not only an actress but also a singer and she released her debut album, A Tribute to Dinah Washington in 1999. Likewise, she won the Obie Award for Distinguished Performance by an Actress in 1998. Freeman was also nominated for Screen Guild Award for Outstanding Performance.

How Is Yvette Freeman’s Relationship With Her Spouse?

The 62 years old actress, Yvette Freeman married her spouse Lanny Hartley. The pair tied the knot on 27th January 1996. Her spouse is a composer and praised for his work in the songs such as Remember, Hideous Scream, Wishful Things, etc.

Freshman and her partner Lanny are in a conjugal relationship for over 23 years but they do not share any children. So far, the duo hasn’t revealed the actual reason for not having kids. Nevertheless, they are still maintaining a peaceful relationship.

Freeman is a patient of diabetes. Due to diabetes, she lost 110 lbs (40 Kg) weight. Freeman does regular checkups and further takes medicine.

How Much Is Yvette Freeman’s Net Worth?

Yvette Freeman’s net worth is around $2 Million as of 2019 which is similar to that of Vanessa Morgan. From her successful multiple professions, Freeman amassed a colossal amount of money. The movies and TV series of Freeman are doing good earning in the box office.

Furthermore, her albums and songs are also successful. Not to mention, her net worth is sure to rise in the coming days as she is still contributing to the Hollywood film industry. Furthermore, she also owns a house in Glendale, CA. The current market value of the house is $500,000.