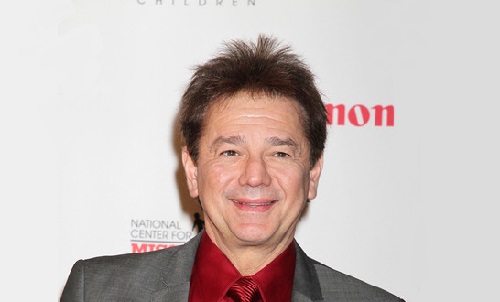 The multi-talented Adrian George Zmed is an American actor, singer, and television personality. The audience took note of his acting skills in the movie Grease 2 and TV Show T.J. Hooker. Adrian started working from 1978 and appeared in movies like Unconditional Love, Sex Sells The Making of Touche, Starsky & Hutch, and Sharknado: The 4th Awakens.

Adrian is currently in a marital relationship with Lyssa Lynne Baker. Who are his former wives? Does he have children? Scroll down to know his personal as well as professional life.

Who Is Adrian Zmed? His Bio And Wiki

Adrian was born on 14th March 1954, in Chicago, Illinois, the USA to Nicolae Zmed (father) and Paraschiva Zmed (mother). Zmed grew up along with his two brothers Cornel Zmed, Walter Zmed. His sun sign is Pisces.

Zmed went to Lane Tech High School. In his early days, Adrian played football. He quit the sport after breaking his leg and started acting. Zmed constantly featured in his school plays like Guys and Dolls, a high school production.

Later, Zmed attended Goodman School of Drama and graduated with a Bachelor of Fine Arts. He is currently 65-years-old and stands at a height of 5 feet 7 inches tall.

Adrian Zmed started his career with a Broadway production Grease and he toured with it. In 1978, he made his first television appearance in the famous show Starsky & Hutch. Zmed appeared in the adaptation of Sylvester Stallone‘s movie The Lords of Flatbush, Flatbush.

He made a guest appearance in TV shows like Goodtime Girls, Angie, I’m a Big Girl Now, Bosom Buddies, and An Evening at the Improv. People know him mostly from his notable work in T.J. Hooker as Officer Romano. Some of the other movies and TV Shows he worked in are Victims for Victims, Hotel, Empty Nest, Murder, She Wrote, and Caroline in the City.

Not just as an actor in movies and TV Shows, Zmed is also a television personality. Adrian appeared as himself in the shows like I Love the 80s, Saturday Night Live, The Bozo Show, and Confessions of a Teen Idol. Zmed worked as the voiceover for video games as well like Star Wars Jedi Starfighter.

Who Is Adrian Zmed’s Wife?

Adrian Zmed is married to thrice. Currently, he is in a marital relationship with Lyssa Lynne Baker. He married her at a small wedding in Thailand on 23rd November 2012.

Zmed married Barbara Fitzner in 1976. Adrian and Barbara met in high school and they fell in love with each other. The pair dated for a few years before getting married.

Their sons Zachary Zmed and Dylan Zmed are now the members of the rock band called The Janks and the Bird Dogs. Unfortunately, their relationship did not last long and ended in divorce.

After the divorce with Barbara, Adrian began dating Susan Wood, a singer, and actress. The couple married in 1995. Like first marriage, Zmed’s second marriage also did not last long as the pair later separated.

Currently, Zmed is living a blissful life with his spouse Lyssa. So far, there are no rumors of their divorce and extramarital affairs.

What Is Adrian Zmed’s Net Worth?

The net worth of Adrian Zmed is $3 million as of 2019. His major source of income is from acting. His movies like Grease 2 and Sharknado earned over $20 million at the box office. Zmed is also a television personality and has hosted a couple of TV shows.

Zmed hosted Saturday Night Live and the host of the show gets the salary of $147,000 per episode and there are 15 episodes each season. In his free time, Adrian travels to exotic locations with his wife and a dog. He appears frequently on sports games and seen supporting the team.