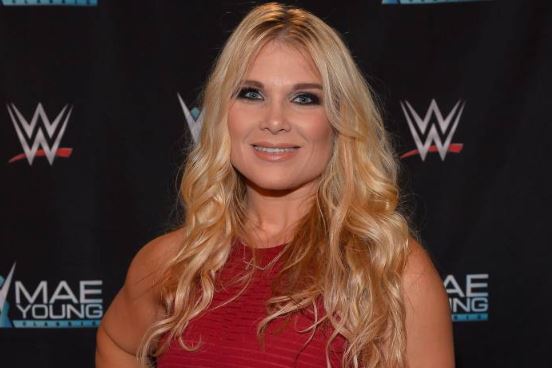 Elizabeth Phoenix a.k.a Beth Phoenix is an American professional wrestler and color commentator.  Beth is a former WWE Divas Champion, a three-time WWE Women’s Champion, and the youngest person ever to be brought into the WWE Hall of Fame.

Moreover, Beth was also featured at the inaugural Shimmer Women Athletes shows. She is currently signed on to WWE, working on the NXT brand as a commentator. If you want to know more about Beth, including her personal and professional life then read the whole article.

Beth Phoenix was born as Elizabeth Kocianski on November 24, 1980, in Elmira, New York, United States. Phoenix is American by nationality and belongs to white ethnicity.

Raised by Polish parents, Beth grew up in Elmira along with her brother. Beth attended Notre Dame High School, where she played tennis and was a track athlete. She completed her degree in Criminal Justice and Public Relations from Canisius College in Buffalo, New York.

Professional wrestler, Beth has accumulated an extraordinary amount from her works. She has a estimated net worth of $4 million as of 2019. The primary source of Phoenix’s earnings came from her WWE career. Besides, her career sucess has helped Beth to deals with several endorsements, campaigns and advertisements. Hence, she might be receiving a big chunk of money from there as well.

She used to get an annual salary of $112,500 as a WWE wrestler. Additionally, she won a $235,000 paycheck in 2011, including a bonus, fees or other charges. Since she is more in the field of wrestling, currently she serves as a part-time commentator for WWE. With such a flourishing career, she must be living a lavish life.

Beth Phoenix’s age is 39 years old as of 2019. As a wrestler, Beth has maintained her body to its optimum. She has a athletic body physique, but the measurements of her body are missing. Similarly, the star stands at a height of 5 feet 7 inches or 1.7m tall. She has beautiful blue eyes and her hair color is blonde.

Moving onto Phoenix’s personal life, she is a married woman. She is happily married to her boyfriend turned husband Adam Joseph Copeland who is better known as Edge. Her husband is a former WWE champion and actor who was also inducted into the WWE Hall of Fame.

Beth walked down the aisle with her parents to get Edge in 2016. Whereas, the couple exchanged their wedding vows on October 30, 2016, in front of WWE superstars, their close friends and family. Although the two haven’t openly spoken about their story on how and when they met but, some sources said that the couple met in WWE.

Beth and Edge has welcomed two adorable daughters before they tied the knot. Their first child, Lyric Rose was born in December 2013. In the same way, the couple was blessed with their second daughter Ruby Ever on May 2016.

The family of four currently lives in Asheville, North Carolina, United States. Beth frequently shares the pictures of her daughters on her Instagram.

Talking about Beth’s past affairs, she was married to Canadian professional wrestler Joey Carolan.  The former couple exchanged their wedding vows in 2001 and later separated in 2010. The couple was together for almost ten years. Besides, the two haven’t shared the reason behind their divorce.

Phoenix started wrestling on the Notre High School scholastic wrestling team. Then she became the first lady varsity wrestler in school’s history. In 1999, she became the North-East freestyle women’s champion and won the same year at the New York State Fair Tournament.

She appeared publicly with Mickie James in RAW to get into the feuds while she was threatening Trish Stratus. For the first time in 2007, she won the WWE Championship by defeating Melina. She later lost Mickie James’ title but later regained in a Triple Threat match at the Judgement day.

She also teamed up with Santino Marella for a short time and contested some matches of the tag team. In 2011, Phoenix beat Kelly Kelly for the first time at Summerslam to win the title of the WWE Divas. She got fired in 2016 by Raw Managing Director Vickie Guerrero after a string of poor results but, later revealed that she resign from her WWE career to support her family. Tyrus, Thea Trinidad, and Debra Marshall are some other renowed wrestlers.