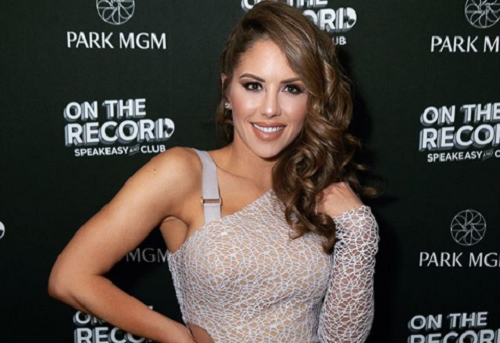 Brittney Palmer is an American ring girl and model, best known for her work as an Octagon girl for the UFC. For her work, she won the Ringcard Girl of the Year for 2012 and 2013 at the World MMA Awards. Palmer also appeared on YouTube in a Mortal Kombat themed video opposite to Jo Garcia, a model.

Palmer is a married woman as of 2019. She is enjoying romantic and blissful moments with her lovely husband. So, does she have any children with her spouse?

Who Is Brittney Palmer? Bio & Wiki

Brittney Palmer was born on 24th June 1987, in San Diego, California, United States. Moreover, she holds American nationality and belongs to Caucasian ethnicity. Palmer and her family moved to Las Vegas from Utah where she spent her childhood.

Palmer developed a strong passion for modeling and participated in many beauty pageants. She also performed as a ring girl in the V- The Ultimate Variety Show in Las Vegas. Later, she moved to Los Angeles near the art hub of Venice Beach with her family.

Brittney Palmer started her career an octagon girl for the Ultimate Fighting Championship in 2005. Later, she appeared at the World Extreme Cagefighting (WEC 47): Brian Bowles Vs. Dominick Cruz in 2010. In UFC, Palmer appears along with Jhenny Andrade. On 19th April 2011, Palmer and Jo Garcia starred in a Mortal Kombat themed video which garnered over 600,000 hits in September 2013.

As a model, Brittney made her first appearance on the cover of the March issue of Playboy. She got preceded by Rachelle Leah and Arianny Celeste as the third ring girl. At the 2012 World MMA Awards, Palmer won Ring Card Girl of the Year, prevailing over Celeste for the award while ending her winning streak.

How Much Is Brittney Palmer’s Net Worth?

Brittney Palmer’s net worth is pretended to be around $2 Million as of 2019. Likewise, she earns a salary in the range of $500 thousand to $800 thousand yearly. Besides this, her husband’s wealth is around $5 Million.

Palmer worked as a model for various fashion agencies and further endorsed with brands. She also featured in many popular magazines. In one of her Instagram post, Palmer promoted a workout enhancer brand Sweet Sweat. So, Palmer probably receives some paycheques from the deals.

Palmer is fond of animals and owns two dogs, Hendrix, and Bananajoe. In one of her Instagram post, she is seen playing with her pet dogs in the backyard. Likewise, Palmer also shares such amazing photos of her dogs.

Is it Saturday yet? #pomeranian #puppylove #hendrix #bananajoe

Brittney Palmer has three tattoos on her body. Firstly, she chose a beautiful lettering tattoo on her shoulder blade back when she celebrated her first Playboy Magazine cover at the Gallery Nightclub in Las Vegas which means a narcissist is not only cruel to yourself but also cruel to those around you.

Who Is Brittney Palmer’s Husband?

Brittney Palmer married Aaron Zalewski in 2014, in San Diego, California. Most of their friends and relatives attended their wedding ceremony. Currently, they don’t have any children. Palmer’s fans are willing to see her along with children and spouse. Palmer and her husband might be planning to have kids in the near future.

On 7th February 2014, Palmer and her husband arrived at the sixth annual Fighters Only World Mixed Martial Arts Awards at The Palazzo in Las Vegas, Nevada. Also, they participate in many functions and programs as well.

Besides, Palmers isn’t involved in any extra-marital relationship affairs with any other person until now. Furthermore, there are no rumors and controversies regarding her personal life and career. Currently, Palmer resides near Venice beach in Los Angeles, California with her family and friends.