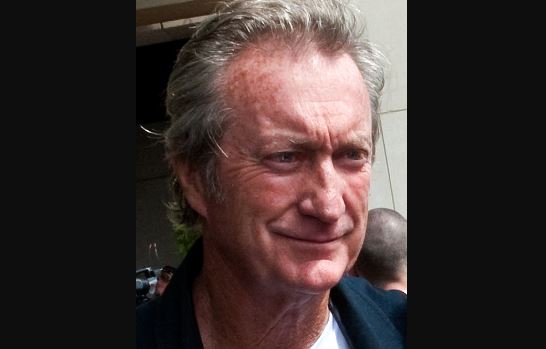 You might have heard a lot of cases where a person finds his love life on the way of his profession. The same case happened to Bryan Brown, an Australian actor who found his love life, Rachel Ward on the set of the TV miniseries, The Thorn Birds in 1983. Who would have thought that the prediction done by Bryan would come true a day?

Bryan shares three children with his spouse, Rachel. One of their daughters, Matilda Brown followed the footsteps of her parents and successfully established as an Australian actress, writer, and director. The Emmy Award nominee, Bryan has amassed $10 Million net worth from his profession.

Let’s discuss his biography in the lower sections.

Bryan Brown was born to his Australian parents, John “Jack” Brown (father) and Molly Brown (mother). As per various tabloids, his father, Jack used to be a pianist at the Langshaw School of Ballet whereas, his mother, Molly worked as a house cleaner.

Bryan grew up along with his younger sister, Kristine. Facing a lot of challenges, he first worked at a financial services company titled AMP. Later, he encountered with his interest in acting since he began amateur theatre performances.

From Australia, Bryan Brown went to Britain in order to pursue his career in the film industry. He first received minor roles and then moved back to Australia and joined Genesian Theatre in Sydney. Shortly after he moved to Queensland Theatre Company in 1975. He made his movie debut through his appearance in the 1975 American mystery film, Scobie Malone. He then played the role of Len in the short film, The Love Letters from Teralba Road in 1977.

The 72 years old, Bryan Brown is married to his long-term girlfriend turned wife, Rachel Ward. The couple shares a strong bond with each other as they are together since their marriage.

They first met on the set of the American TV miniseries, The Thorn Birds for which Bryan was nominated for two awards, Golden Globe Award and Primetime Emmy Award respectively.

During the shooting of the film, Bryan once told that he read Rachel’s palm and predicted her future saying she would have three children from her marriage. They shortly started dating each other and finally exchanged their wedding vows in 1983.

From their blissful married life, the couple shares three children as Bryan predicted before getting married. They have two daughters; Rosie (born in 1984) and Matilda Brown (born in 1987). They welcomed a son, Joe Brown in 1992. Currently, her daughter, Matilda is 31-32 years old and active on her as an Australian actress, director, and writer.

It has been now over 35 years that Bryan is together with his spouse, Rachel. So far, there are no news and rumors of their divorce. Therefore, Bryan is spending a happy family life with his wife and kids. Besides, he is out of controversies in 2019.

The Australian actor, Bryan Brown is serving the entertainment industry since 1977. He has appeared in numerous TV series and a number of films. His net worth is $10 Million as per the Celebrity Net Worth. Similarly, his wife, Rachel has also an equal amount of capital of $10 Million that she earned from her profession as a English-Australian actress and film director.

Their daughter, Matilda has maintained a net worth of around $1 Million. As Bryan is still active on his career, his net worth will surely increase high in the near future. For now, he is spending a lavish life with his family.