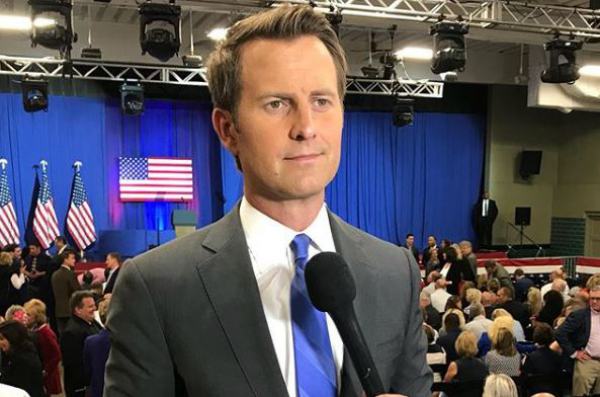 The handsome reporter has a decent net worth and is living a happy married life. Besides, McShane is the father of three children.

Connell McShane was born on August 4, 1977, in Long Island, New York, the U.S. He is an American by nationality and belongs to white ethnicity. As of 2019, McShane is 41 years old, and his star sign is Leo.

You May Like: Natalie Tysdal Bio, Wiki, Age, Net Worth, Salary, Married, & Husband

McShane graduated from Fordham University with a Bachelor of Arts degree in Communication and Media Studies.

One of the good looking reporters on television, Connell McShane stands at a decent height of 1.79 m (5 feet 9 inch). Likewise, he has a body weight of 132.2 lbs.

How much is Connell McShane’s Net Worth? Salary & Earnings

The Fox Business anchor, Connell McShane has a net worth of $1.5 Million as of 2019. The primary source of his income is reporting and he earns an annual salary of over $137,000 from his journalism career. As per some online sources, the average yearly salary at Fox News reporter is $75,000. Hence, looking at McShane’s payroll, we can say that he earns a stunning income.

McShane has been working for more than a decade in the Journalism field. Currently, he co-anchors After The Bell alongside Melissa Francis. Further, McShane also served as the news anchor on Imus in the Morning from 2010 to 2017.

The 41-year-old, News Anchor, Connell McShane is a happily married man. His wife is a beautiful lady named Renee McShane. The husband-wife duo was once old-time lovers. Further, McShane hasn’t revealed his dating history; however, he often posts pictures of his wife and children on social media.

Further, the lovely couple is the proud parents of three children. They share two daughters named, Caroline, Lucy and a son named, Jack. Their first son, Jack, was born on February 26, 2000; first daughter, Lucy, was born on May 10, 2003, and second daughter Caroline was born on March 30, 2005.

Despite the hectic schedule and tiresome assignments, McShane manages to give time for his family. His deep love for his children can be seen on Instagram. Connell attends his daughter’s football game and watches baseball matches with his son. On his Instagram account, he posted a sweet birthday message for all three children.

Connell McShane began his journalism career as a sports broadcaster. He joined FOX Business Network (FBN) in September 2007 and currently serves as a co-anchor of After the Bell (weekdays 4-5PM/ET) alongside FBN’s Melissa Francis.

He served as the news anchor and Friday host on Imus in the Morning from 2011 to 2017. Additionally, McShane broadcasted live reports from both the New York Stock Exchange (NYSE) and NASDAQ.