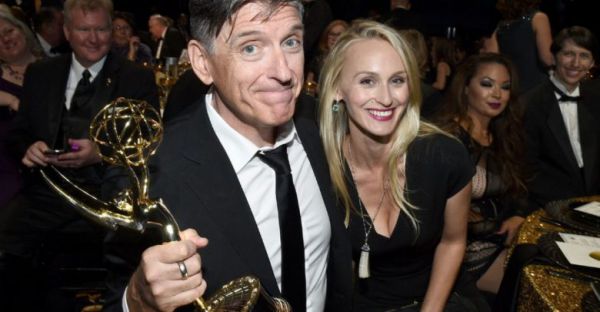 “I don’t know now if I’m funny but I just keep talking and hope that I hit something that’s funny”. The famous quote from one of the top late-night show host Craig Ferguson. He is currently in a married relationship with Megan Wallace Cunningham but that doesn’t stop him from flirting with the actress on his show.

Like other award-winning hosts Jimmy Kimmel, David Letterman, and Conan O’Brien, Ferguson is also the winner of an award. The Emmy-Award winning host is currently living in a blissful marital relationship but before that, he was involved in two failed marriage. Let’s find out more about his relationships and his married life.

The couple married each other in 2008 after dating for almost three years. Ferguson, however, announced his wedding in 2009 on his talk show. Coming from two failed marriages, Ferguson was very optimistic in finding love again.

And nevertheless, he found love in the form of Megan in 2005. The pair started dating each other in 2005 after meeting each other. Their first date went very well as the duo build an instant connection with each other.

Megan and Ferguson began to go out on more dates and soon they were a thing. Despite being in a relationship, the couple tried to keep the nature of their relationship very private. And after staying in a romantic affair for three years, they decided to take their relationship to the next level.

The 57-years-old exchanged wedding vows with the actress in 2008 in an intimate affair. In their auspicious day, the pair invited very few guests and only consisted of their family members, close friends, and relatives. The venue was placed at Megan’s parents’ farmhouse.

For their big day, Ferguson appeared in a dashing suit while the bride walked the aisle in a beautiful white gown. The pair kept their matrimony low profile and finally in 2009, Ferguson announced his wedding to the world via his talk show.

The Scottish-American talk show host is the father of two children. From his third wife Megan, Ferguson welcomed one child. On January 31, 2011, Megan gave birth to a child, a son which the pair named Liam James Ferguson.

Not just that, Craig also welcomed his other child, Milo Hamish Ferguson from his second wife. Born in 2001, Milo is currently 18-years of age. Besides this, Ferguson is not the father of any other children.

In 1983, Ferguson married for the first time in his life. He tied the knot with Anne Hogarth in a private affair. The marriage stood for three years before the pair started to have trouble in their marital relationship.

He divorced Anne in 1986 after three years of relationship. From his first marriage, Ferguson did not have any children. After that, the talk show host formed the nuptials with Sascha Corwin in 1998.

Nearly after twelve years of his split with Anne, Craig found the love he was looking for. The pair survived their marriage for six years but separated because of irreconcilable differences. He has a son from the relationship.

Currently, Craig is living happily with Megan in the Los Angeles mansion with his two sons. There are no rumors of the pair divorce as of now; besides both of them complement each other.