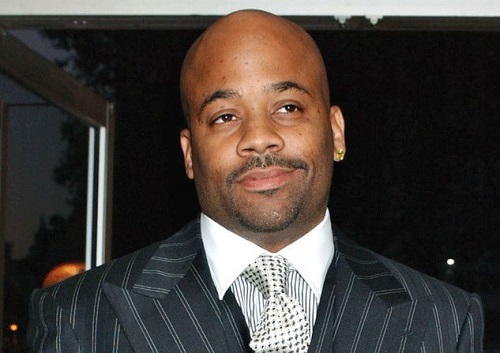 Damon Dash is an American film producer, director, actor as well as an entrepreneur. He is well known as a co-founder of Roc-A-Fella along with Shawn “Jay-Z” Carter. In addition, Dash is also involved in several business ventures including Rocawear clothing, and nightclub DD172.

The 48 years old Dash earns a tremendous amount of money from his multiple professions. His net worth is around $2 Million as of 2019.

Damon Dash was born on May 3, 1971, in New York City, NY under the birth sign Taurus. As per his nationality, Dash is American and belongs to African-American ethnic background. He grew up along with his brothers Jeremy Dash and Bobby Dash.

At the age of 15, he lost his mom due to asthma and took odd jobs like selling newspapers, sweeping the floors of barbershops to afford some money for buying shoes and clothing.

As a child, Dash faced several difficulties but overcoming the problem Damon went to a private school to received a better education. In addition, he also got involved in drug dealing but left it after losing many friends. Later, Dash developed a passion for music and began producing music.

Who Is Damon Dash’s Wife?

An American entrepreneur Damon Dash faced several up and downs in his personal life. First, he met R&B singer Aaliyah in the summer of 2000 in New York City. The couple dated each other until the death of Aaliyah on 25th August 2001 in a plane crash in The Bahamas. The couple was not formally engaged but in interviews given after Aaliyah’s death, Dash told that they had planned to marry soon.

After the death of his girlfriend Aaliyah, Damon met Rachel Roy a fashion designer when she was working as an intern at Rocawear. Later the pair shared the wedding vows in 2005 in the presence of their family and friends. Together Dash and Rachel shares two daughters Ava Dash and Tallulah Dash.

Though the couple shared two children together, they failed to continue their relationship and decided to separate. Following their divorce, in 2009 the former husband and wife had a bitter custody battle. In April 2015, the fashion designer claimed Dash of domestic abuse and filed for a restraining order.

Moreover, Roy was awarded sole custody of both daughters and the court granted Roy and her daughters with three years restraining order against Dash. In addition, Dash filed $2.5 Million and claimed against Roy in asserted damage for allegedly harming their joint fashion business Royale Etnia.

In addition, Dash has two sons Dame Boogie Dash and Lucy with his girlfriend, Linda Williams. Furthermore, in 2014 he paid Williams $50000 for causing her to be prosecuted on harassment charges in 2009.

The 48 years old Damon Dash is in a romantic relationship with Raquel Horn. The couple is together since 2015. Moreover, Dash and Horn regard each other as a fiancee.

Moreover, on February 14, 2018, Raquel wished her boyfriend on the occasion of Valentine day sharing a beautiful picture on Instagram with a caption:

Happy Valentines my love! … you inspire me every second of the day … you are the best man a woman could ask for and an amazing father … congratulations on this movie baby I am so proud of you!

Happy Valentines my love! … you inspire me every second of the day … you are the best man a woman could ask for and an amazing father … congratulations on this movie baby I am so proud of you! @duskopoppington ❤️

Though, Damon and Raquel are together for a long time they haven’t planned to share the wedding vows. The lovebirds may be planning to give a surprise to their fans soon.

The multitalented personality Damon Dash’s net worth is $2 Million which is similar to that of an American journalist Courtney Hazlett. His main source of income is from his multiple careers as an American entrepreneur, record executive, film producer, director, and actor. Further, he is also a co-founder of Roc-A-Fella.

Moreover, Dash worked on the albums Countdown to Armageddon, Part 2 and Back to the Lab. Likewise, he has also performed in the 2002 urban crome comedy Paper Soldiers alongside Kevin Hart, Eniko Parrish, and others. From the shows, and albums Dash definitely received good paycheques.