Diana Williams is an American television journalist who works for WABC television based in New York City, New York as their news anchor. She co-anchors the one-hour 5 p.m. Eyewitness News Broadcast and also hosts the Sunday morning public-Affairs program Eyewitness News Up Close which airs at 11 a.m.

Diana has an estimated net worth of $1.5 million gathered throughout her career in the media industry. What’s her salary? Read the full article in order to know further details about her income, property as well as many more.

American journalist, Diana Williams was born on July 18, 1958, in Columbus, Ohio. Taking birth inside the territory of America makes her of American nationality. Further, she belongs to white ethnicity.

After completing high school, Diana earned her graduate degree in economics from the Duke University in Durham, North Carolina in 1980.

Shortly after the graduation, Diana interned at WTVD in Durham. Afterward, she began a career in television in Charlotte, North Carolina, where she worked as a reporter at WSOC. She then covered 6 p.m. and 11 p.m. show at WBTV as a weeknight anchor.

In 1991, Williams joined WABC as their reporter and eventually became a weekend anchor for the network. She became a co-anchor of the station’s 11 p.m. Eyewitness News newscast with Bill Beutel within a year. In the manner, her career in this network gradually took growth.

Williams has traveled the world covering stories for Eyewitness News which include Ireland and Israel conflicts report. Similarly, she mostly traveled with Pope John Paul II who is known for his historic visit to Israel in 2000. Additionally, she has traveled to Baltimore, Maryland; Mexico City, Mexico; Toronto, Ontario, Canada with the Pope. Also, she has covered the September 11, 2001, attacks.

At last but not least, Williams is an Emmy Award-winning journalist. She was honored by this award for her half-hour special coverage called Dangerous Crossings which focused the immigration issues along the Mexican and Arizona border. Furthermore, she has won awards for her yearly breast-cancer specials.

The famous journalist, Diana Williams is a married woman. She and her husband Douglas Wayne Shanks are surpassing their three decades of the marital relationship. The duo exchanged their wedding vows in November 1985. In 2018 at their 33rd marriage anniversary, Diana uploaded their wedding picture. 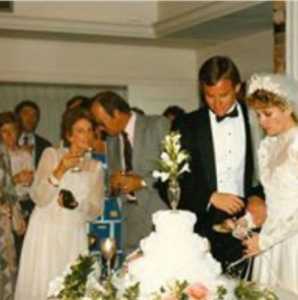 Image: Diana and her husband, Douglas Wayne Shanks at their wedding day.

The married couple shares three children altogether from their blissful marriage. One of her children is named Nathaniel Williams while the two daughter’s identity is yet not confirmed.

Joining Nat for Heroes on the Hudson— kayaking and sailing on a beautiful Friday. Thanks VA.

Another interesting fact about their family is that both father and son have near-death experiences. Talking about the father, Douglas once suffered a sporadic disease called Amyloidosis during late November 2014. He was hospitalized in ICU at MSK. At the time, one of his family members helped him on kidney transplant while he was on dialysis for four months.

On the other hand, their son, Nathaniel Williams had a road accident at Panama City in 2015. As of now, he is doing great in keeping himself out of danger after that incident.

Currently, Diana Williams has a net worth of $1.5 million approximately gathered all through her career from the journalism. And of course, in coming years, her net worth will surely exceed the current amount of her net value.

In the context of her salary, William is probably earning a good amount from her current network. According to the survey, ABC News Anchor earns around $87,153 as their average annual salary. While the ABC reporters annual payroll ranges from $52,661 to $108,353.

Currently, the WABC reporter, Diana has reached the age of 61 as per her birth year. She still holds a charm on her face despite aging. She stands at a height of 5 feet 6 inch and has well maintained her weight to an optimum level. Similarly, she looks very beautiful on screen with her blonde hair and blue eyes.