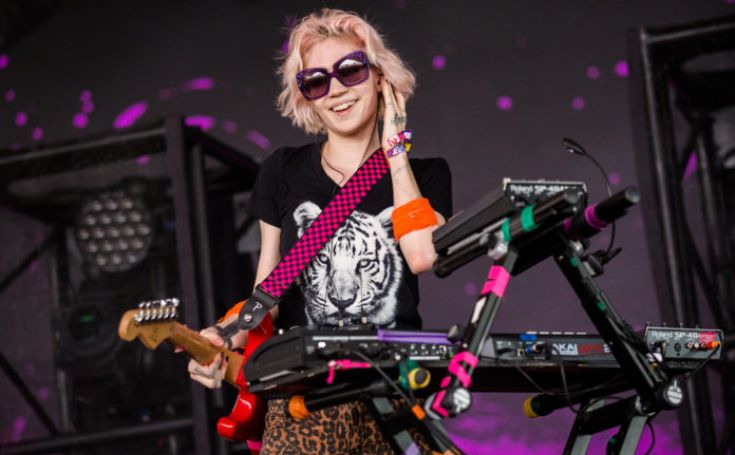 If you follow the latest trends currently going on in the United States of America, then Grimes must not be a new name to you.

Claire Elise Grimes, aka Grimes, is a Juno Award-winning singer, songwriter, musician, visual artist, and record producer from Canada who has been active for more than a decade.

Further, she is famous for her music genres like Dream Pop, Electronic, and Synth-pop. Also, Claire became well-known after the release of her third studio album, Visions, in 2012 and released four studio albums by January 2020 plus a fifth studio album in February 2020.

Moreover, the singer launched her latest album, Miss Anthropocene, in 2020 and has received numerous awards and accolades for her music.

Be with us furthermore and collect every detail of her in this capsule you want to know.

The famous musician Grimes came into this earth as Claire Elise Boucher on the 17th of March, 1988, under Pisces birth sign and was born in Vancouver, British Columbia.

Likewise, she is of Canadian citizenship, and her ancestors are French, Italian, Metis, and Ukrainian.

Similarly, she is the only child born to Sandy Garossino and her husband. In contrast, her mother is a former Crown prosecutor and arts advocate, while her father was a former banker who works in biotech’s business side.

Sadly, the details of her father are still under review.

Also, she has a step-brother named Jay Worthy, a music artist. Additionally, Claire completed her primary education at a Catholic school and later graduated from Lord Byng Secondary School in 2006.

Then, he enrolled at McGill University in Montreal, Quebec, to study neuroscience. But unfortunately, she dropped out in 2011 before completing a degree.

The skillful Artist Elise began her career as a songwriter in 2007 and later initiated performing on the stage as a self-taught artist. Then, she launched her debut album, Geidi Primes, in 2010 and released her second album on Arbutus Records in the same year.

After that, she went on her first musical tour with the musical group, The Pop Winds and supported Lykke Li in 2011. There, she also started working with the producer, Blood Diamonds.

Moving forward, Miss Grimes signed with 4AD in 2012 and launched her third album, Visions, under the recording label, which turned out to be the first milestone in her career. Also, it was listed as the NME’s and Claire was listed as the a500 Greatest Albums of All Time.

On the 26th of June, Elise launched the track, Go, which was originally written for the popular Diva, Rihanna. Later, she launched the album REALTiTi on the 8th of March 2015.

In the same way, she was featured in music albums like Love4Eva, Pynk, Play Destroy, and That’s What the Drugs Are For.

On the 21st of February 2020, she launched her latest album, Miss Anthropocene, and it was peaked at the 32nd position in the US Billboard.

The talented singer Grimes has received numerous awards, honors, and achievements. In 2013, she won the Juno Award for Electronic Album of the Year and Breakthrough Artist.

The songwriter also receives the Artist of the Year award at the Webby Awards in the same year.

The 34 years old charming lady is currently living a happy and beautiful life along with her life partner.

Further, Grimes is involved in a romantic relationship with a famous American billionaire, business and technology tycoon, Elon Reeve Musk, Elon Musk. Since 2018, the duo has been in a relationship.

Being a private person, the lady has not revealed the story behind the relationship; however, the pair met online. On the 7th of May, 2018, Mr. Musk opened up his relationship publicly.

Similarly, the two are yet to get engaged and tie their knot. Nonetheless, their lovers are eagerly waiting for them to tie their knot soon as soon as possible.

Do You Know Grimes is the Mother of a Child?

Yes! You heard right. The gorgeous musician is the mother of a son. Later on the 8the of January 2020, Claire disclosed that she was expecting a baby with her partner, Elon.

Most people are confused about the name of their son. In addition, Musk has shared how to pronounce his son’s name; Elon says the name is pronounced X Ash A Twelve.

Also, her partner mentions that he had to spend some time thinking about the best name that his son would have.

Past Affairs of Elon Musk

Although this might be the first formal relationship of Grimes, for her partner, Elon is well known for his relationship history.

Mr. Musk married his first wife, Justine Wilson, in 2000 after meeting each other at Queen’s University. But, their relationship ended in 2008. Together, they had a total of five children born from in-virto fertilization.

After this heartbreak, he dated Talulah Riley and exchanged their wedding vows in 2010. Like his first marriage, their marriage also ended with divorce in January 2012. To everyone’s surprise, the duo remarried in July 2013.

Nevertheless, the two decided to separate and filed for divorce in December 2014. Further, the case was finalized in late 2016.

After that, he formally dated Amber Heard but could not manage time for each other and decided to move apart in late 2017. Subsequently, an entrepreneur dated Grimes and have been together ever since.

As of the 8th of February, 2022, Grimes has a mouth-watering net worth of $4 Million which she has accumulated through her successful career working as a singer.

Also, as a musician or record sales, concerts, tours, and endorsements.

Also, the singer has endorsed several brands, including her own, via her social media accounts and has been singing since 2007.

On the other side, her partner, Elon, has a staggering net worth of more than $40 Billion as of now, and he credits most of his money to his successful career of working as the CEO of Tesla And Rocket Company SpaceX.

Follow AllStarBio, For More Biographies On Popular singers and Musicians.