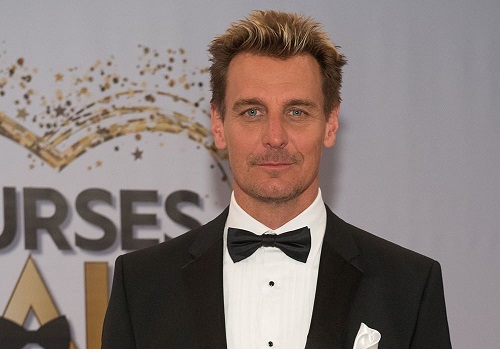 Ingo Rademacher is a West-German-born Australian actor. He is popular for his role as Jasper “Jax” Jacks in the American daytime soap opera, General Hospital. As a dancer, he placed 5th on the American reality dance show, Dancing with the Stars. Recently, he starred in The Bold and the Beautiful as Thorne Forrester.

Ingo is a married man as of 2019. He is living a happy married life with his lovely wife. So, does he have any children?

Who is Ingo Rademacher? Bio & Wiki

Ingo Rademacher was born on 22nd April 1971, in Iserlohn, West Germany. Moreover, he holds dual nationality of German and Australia. He was raised by his mother, Roswitha, and his father, Arndt Rademacher. Ingo grew up with his younger sister, Anne Rademacher. He and his family moved to Australia at the age of 10.

Rademacher attended the University of Queensland located in Brisbane for a short time. After six months, he dropped out to pursue his modeling career. He also participated in many theatrical productions in his school days.

Inside Of Ingo Rademacher’s Career

Ingo Rademacher started his career from the Australian television series, Paradise Beach. In the series, he played the role of Sean Hayden. Later, he appeared in the drama television series, Echo Point in 1995. He starred in the teen sitcom, Clueless alongside Rachel Blanchard and Brittany Murphy in 1996.

Ingo made his appearance in the American prime time soap opera, Titans as David O’Connor in 2000. Furthermore, he acted in the crime thriller movie, Alex Cross as Officer, Sacks in 2012. Rademacher also featured in the made-for-television romantic drama movie, A Royal Christmas Ball. His other television works are Hawaii Five-0, According to Jim, etc.

How Much Is Ingo Rademacher’s Net Worth?

Ingo Rademacher’s net worth is $2 Million as of 2019. Having an impressive wealth, he also makes a bunch of money from his other works which include advertisements, cameo appearances, etc. Similarly, Rademacher boasts an annual salary in the range of $500 thousand to $950 thousand annually.

Ingo is an official member of the board of Heal the Bay, a Santa Monica-based environmental organization. Furthermore, he usually donates 10% percent of his income for charitable works.

Ingo Rademacher met his wife, Ehiku Rademacher in 2008. Shortly they fell in love with each other in their first encounter. Together, they share a son, Peanut Kai born before their marriage on 11th July 2008. Later, the lovebirds married on 3rd October 2009. Furthermore, they welcomed their adorable son, Pohaku Zen Rademacher on 13th May 2012.

Before his marriage with Ehiku, Ingo was involved in a relationship with Rebecca Herbst. They met on the set of General Hospital. Unfortunately, their relationship didn’t last long due to some misunderstanding.

Ingo often shares pictures of his wife and children on his Instagram account. He shared a picture of his family while spending quality time in Waimea Bay, Hawaii on 31st December 2018. Moreover, he posted a photo while traveling to Dockweiler State Beach with his family and friends.