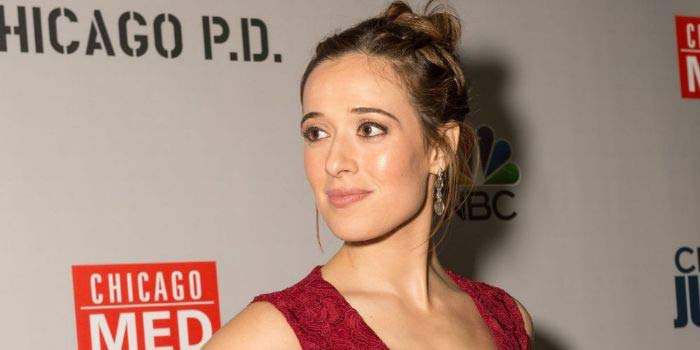 Marina Squerciati is an American actress born on March 17, 1981. She is the only daughter of her beautician mother, Paula and law teacher as well as judge father, Rodger Squerciati.

She was born in Los Angeles. Squerciati is a Christian by religion; Squerciati is an American by nationality and belongs to white ethnicity. She plays Officer Kim Burgess in a crime drama series Chicago P.D.

Squerciati grew up in Mississippi with her grandparents until the age of 6. She remembers those days of her life and remembers how her grandfather used to take her to hike from where she could see rainbows and waterfalls.

As she grew up with her grandparents, she has a special place in her heart for them.

My new favorite spot to go clubbing, @clubpilates_westloop! ? Working out here hardcore so my core (see what I did there?) will bikini ready just in time for the polar plunge. ❄️ ? (ps. The intro class is free, YOU HAVE TO TRY IT!) #clubpilates #fitspo #bodybyclubpilates #soon #pilatesreformer #pilatesbody #pilatesreformer #momlife #mombod #notanadjustreallyloveit #clublife #dropthebeat

When asked about her grandfather in an interview, she said

He was one of those people, who’d never get old. I remember him taking me to hunt, cooking delicious meals and also playing with me. He just didn’t get tired of it.

Squerciati couldn’t spend much time with her grandmother as she passed away soon. She was very much encouraged by her grandfather to dance from a very young age.

After her 6th birthday, she returned to LA to live with her parents. When she was 11, her grandfather passed away.

Maria started getting into acting back in her school days. She started acting in Flintridge Sacred Heart Academy, which was an all-girl school. Back then, she was a sharp kid, very much into her academics and enthusiastic about acting.

As her grandfather inspired her to dance, Maria also joined dance classes. She started to do very well in her drama class, performed many roles, and appeared in local theatre plays.

? Opening night of Pretty Woman the musical, with my pretty women at my side. Congratulations to the cast and crew! Thank you for a fun night. ?? #prettywomanthemusical #girlsnightout #redcarpet @veronicabeard #veronicabeard #musicals #chicagonightlife #torreydevittostyle (Yes, that’s an actual hashtag that came up, and I was like, I AM USING THIS!!!) #ootd #style #redcarpetfashion #ruffledress #oneshoulderdress #flowerdress ? by: @bruglikas for @prettywoman

After graduating from high school, Squerciati joined Northwestern University to study acting. She graduated in 2003 with a BFA degree in drama and theatre.

As she started her career with theatre, Squerciati’s first lead role was in a play, ‘Just in time: The Judy Holliday Story’ and won the Agnes Moorehead Award in her first appearance.

After about a year, she made her Broadway debut in ‘To Be or Not to Be,’ which was based on the story by Ernes Halliday.

Squerciati’s hardworking nature and impressive acting skills got her to play some roles in other plays like Manipulation, Beauty of the Father etc.

Maria Squerciati is a married woman. She married Eli Kay-Oliphant, her college sweetheart. They first met while studying at Northwestern University.

After the blissful marriage, she welcomed her first baby daughter in May 2018 with Eli Kay-Oliphant. They are both blessed at present and have a substantial life.

Moreover, she was rumored to be in a marital affair with Patrick John Flueger in 2014. He is an American actor, best kn0wn for a lead role as Shawn Farrell in the television series The 4400.

Flueger was born on December 10, 1983, to parents KC Fluger and Kim Flueger.

Patrick and Maria first met on the set of Chicago P.D in the year 2014. After the meeting, they both eventually fall in love with each other.

Some of the sources even claim that they both are still dating. However, the information hasn’t been confirmed yet as she is married.

Maria maintained a good sum of income from her acting career. Her net worth of 2018 is reported to be around $3 million. However, she has never talked about her salary before the media.