Today’s article is all about the famous former athlete, Sanya Richards-Ross, who is also a former international track athlete. She used to represent the United States of America in the Olympic games. Not only a representative, but Sanya is also a gold medalist and an owner of many awards. The previous field athlete is also a seven-time medalist at the World Championship. She is also regarded as the best runner in the world.

Well, through the above mentioned short information about Sanya, it can be said that the lady was doing well on her career and has also obtained enormous prominence as well as a hefty sum of wealth. So, what about her love life? Is she a married woman or is dating someone currently? Know about it by reading the article until the end.

Born on 26th February 1985 in Kingston, Jamaica, Sanya is the second child of Sharon Richards and Archie Richards. She was born under the sun sign Pisces. Further, Sanya holds Jamaican-American nationality and belongs to the mixed ethnic group. Her parents raised her, along with her sister Shari Richards. 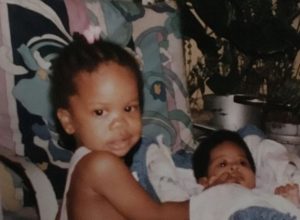 Childhood image of Sanya Richards-Ross along with her sister. Source: Instagram @sanyarichiross

Apart, Shanya attended St. Thomas Aquinas High School in Fort Lauderdale. She finished her education from there in 2002 with a 4.0 GPA. During her school days, she was also regarded as a National High School Female Athlete. Then, she joined Immaculate Conception High School, a school for girls. After her high school over, she leaves her hometown Jamaica for the USA.

After shifting to the US, she joined the University of Texas at Austin in 2003. Additionally, during her college days, she used to participate on many athletic games. While at the university, she won the NCCA national championship at the time of 50:58.

The former athlete and a founder of a Momination, Sanya, is a happily married woman. She tied the knot to the American former football cornerback, Aaron Ross, on February 26, 2010, at the Hyde Park Baptist Church in Austin, Texas. Their wedding ceremony was held lavishly.

On the big day, the bride looked adorable on her strapless white gown, which featured a sweetheart neckline. Additionally, Sanya chooses a white bouquet and a short veil for the day. While the groom wore white suit pants, shirts, which he teamed up with a white tie.

How Did The Couple Meet?

Well, the couple knew one another since college days. Aaron first notices Sanya and instantly fell for her. He said in one of the interviews, “When I first saw her, I just like her, and I even vowed to my mother saying,  ‘I’m going to get her’.” But at that time, he did not talk with Sanya.

After a week, the now-married couples start dating. Four years after their affair, the pair finally got engaged in 2007, and the rest is history.

Proud Parents of an Adorable Kid

Mr. and Mrs. Ross are now proud parents of their one and only child. The couple’s kid, Aaron Jermaine Ross II, was born on August 12, 2017. His zodiac sign is Leo. 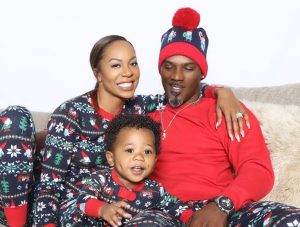 Both parents often post pictures of them with their children on their social media. It seems like the pair is enjoying their parenthood.

The former, Olympian, has a total net worth of $2.5 million, which is quite more than that of another athlete, Brandon Fricke, who also has a net worth of $2 million in total. As per the sources, an average wage of a track and field (runner) athlete in America is $32000 per year.

Sanya, in addition, is the founder of the company Mommination, which supports a child and a woman. Similarly, she endorses the brand Nike. Back in 2012, she also used to endorse BMW. 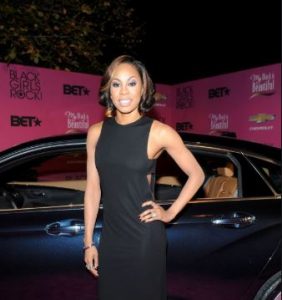 Sanya Richards Ross posing, along with her black car. Source: The Black Women

Regarding Sanya’s spouse, Aaron, he has a total net worth of $4 million as of 2019. Being a professional former football cornerback, he grabbed a good sum of wealth and is living a lavish lifestyle.