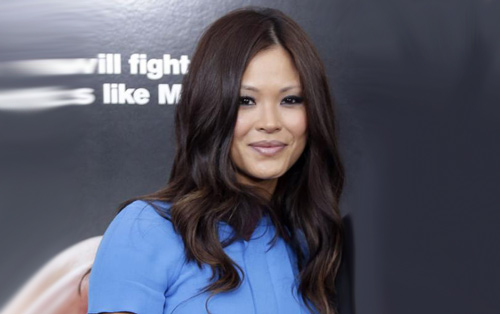 Steffiana de la Cruz is an American actress and former model famous for the movies Paul Blart: Mall Cop, both the parts and Zookeeper. She has also featured a guest role in The King of Queens.

Similarly, Steffiana has married a co-actor of Paul Blart: Mall Cop, Kevin James. Her husband, Kevin, is famously known for his comical roles. To know more about her married life and net worth, scroll below.

Who is Steffiana de la Cruz?

Steffiana de la Cruz was born on August 28, 1974, in the Philippines. When she was a child, her parents moved to New York. Steffiana is of Filipino ethnicity, and her nationality is American. Her birth name is Stephanie Anna Marie Zantua.

Furthermore, Cruz got interested in acting and modeling early, but there is not much information about her educational background. Steffiana is currently 44 years old and stands at 5 Feet 8 Inches. Her birth sign is Virgo.

In her career, Steffiana Cruz appeared in several movies and modeling gigs. From an early age, Steffiana wanted to do modeling and acting. She was talented and started her modeling career in the industry early.

Steffiana got minor roles here and there, which allowed her to feature in some of the seasons of The King of Queens. In her television career, Steffiana played as the masseuse in season 4 of Eddie Money, Tine on Damned Yanky season 6.

Also, Steffiana appeared in Black List season 7 as Sue and as Sienna in Affair Trade season 9. Besides TV, she starred in some movies, where her biggest roles so far in her career were in Paul Blart: Mall Cop in 2009 and Zookeeper. Her career is still growing, although she takes care of her children and family.

Who is Steffiana de la Cruz Married? Her Husband & Children

Steffiana de la Cruz married the fellow actor Kevin James. Her husband, Kevin, is a famous actor and comedian. The couple got married on June 19, 2004. The wedding took place at St. Edward Catholic Church in Dana Point, California and the reception took place at Montage Resort in Laguna Beach.

However, Steffiana has not been part of controversies and rumors regarding her relationship. But she was in a relationship with the actor Chris Penn from 1992 to 1999. The relationship never moved into a married relationship.

Steffiana and her present husband, Kevin, met on a blind date, and after that, their relationship started and still going strong.

What is Steffiana de la Cruz’s Net Worth?

Steffiana de la Cruz is a successful actress and model, and her estimated net worth is around $5 Million. She earned all of this from her successful career. Besides that, her husband, Kevin James, has a net worth of $80 Million.

As the reports, it is an expensive house, but the exact figure of the house is not known yet.

Steffiana Cruz has a perfect body figure of 32-24-34 inches. Cruz is 5 feet 8 inches tall and weighs approximately 55 Kg. She has dark brown hair and eyes of the same color.