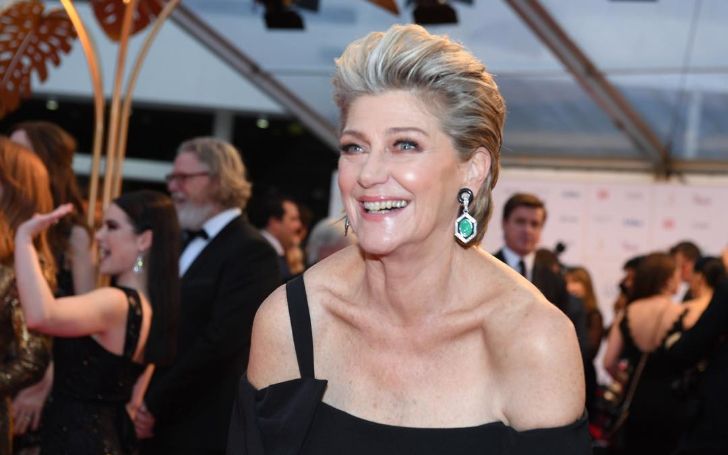 Tina Bursill is a celebrated actress. Her remarkable acting career spans decades in the film industry. She started her acting career in theatrical entertainment and political satire such as The Son of the Naked Vicar and Scandals of 74.

Bursil’s character is usually grounded, marvelous, humorous, and self-reliant lady. For instance, alcoholic Lenore in Time of Our Lives, single mum Hilary Scheppers in Heartbreak High, and Maree, the project mum in A Moody Christmas and The Moodys.

Therefore, she is one of the much-loved Australian actresses.

The actress has received numerous awards, including the Australian Film Institute Awards for Best Actress in a Supporting Role, Jilted.

Likewise, Equity Award for Most Outstanding Performance by an Ensemble in a Comedy Series, A Moody Christmas. Also, two AACTA Award nominations, in 2017 for Best Supporting Actress and 2018 for Best Actress in Doctor Doctor.

Born and raised in Sydney, Tina Bursil is an Australian actress. Before stepping into the film industry, Tina Bursil wanted to be an anthropologist.

However, she changed her mind after studying drama at the National Institute of Dramatic Art.

As mentioned above, the actress started her acting career in musicals, stand-up comedy, and theatre. Tina Bursil rose to prominence after starring in Skyways’s TV drama playing the gorgeous and fabulous blonde administrator Louise Carter. Her other breakthrough role was in Prisoner as the scheming Sonia Stevens.

In addition, Bursil’s notable theatre credits are Feather in the Web for Griffin Theatre Company; Beyond Mozambique and Zastrozzi for Nimrod Theatre; Boys Will Be Boys at the Sydney Theatre Company; Top Silk and Up for Grabs.

She received a MO Award nomination for Best Female Actor in a Play Up for Grabs.

As one of Australia’s best actresses, Tine Bursil continues to work in all media.

Who is Tina Bursil’s Partner?

Tina Bursil is very private when it comes to her personal life. She keeps everything under wrap. The actress has never revealed her partner even though she has a daughter.

According to the IMDb, she is the mother of Stephanie Bursill.

Stephanie Bursill is an actress and a presenter. She has worked as a professional actress and presenter for the past ten years in Tv Film, Theatre, and Commercials working both in Australia and the UK.

Neither her daughter Stephanie nor Tina herself has spoken about her partner. As a result, Tina Bursil’s partner remains unknown.

In addition, there is no information on the actress’s past relationship.

As for her education, Tina Bursil attended Cremorne Girls High School and graduated from the National Institute of Dramatic Art in 1971, studying drama.

How rich is Tina Bursill? Know her Networth!

Tina Bursil stepped into the film industry in 1973. She has been active ever since. In 1973, she made her acting debut in the short-lived comedy series The People Next Door as Meg Penrose.

Subsequently, Tina was a regular in the daily soap opera The Unisexers, launched on the Nine Network in February 1975.

The actress had a breakthrough role in the Seven Network drama series Skyways as Louise Carter, for which she appeared from 1979 to 1981. She also had a recurring role in the police drama series King’s Men during playing Louise in Skyways.

After her breakthrough role, Tina Bursill was cast in the role of Sonia Stevens on Network Ten’s cult classic prison drama series Prisoner akaPrisoner: Cell Block H in 1983. She remained in the series until 1984. The actor is widely famous for her role as Sonia Stevens.

Besides, the 71-year-old appeared in several recurring roles after appearing in Prisoner. She had a recurring role in A Country Practice as Bianca Forbes-Hamilton in 1981; Cecily Day in 1985; Hey Dad..! as Det. Sgt. Anne Burke in 1987; Heartbreak High in 1997 as the mother of characters Ryan and Anita Scheppers, Hilary Scheppers.

In addition, Tina is well known for her recurring roles on the seven network soap operas Home as Lois Crawford and Away as Stella Patterson.

Tina Bursill’s networth is over $5 million!

The 71-year-old actress holds a networth of over $5 million. No wonder she has gathered this hefty sum through her accomplished career as an actress in the film industry that spans decades.

To date, Tina Bursill has appeared in 11 films, 53 television series, and 11 television films.

Furthermore, The actress made her feature film debut in 1975, starring in The Great Macarthy. Then, she appeared in a 1984 film Melvin, Son of Alvin, a sequel to the 1973 comedy Alvin Purple.

Moreover, she played in Jilted in 1987 and received an Australian Film Institute Award for Best Actress in a Supporting Role. Her notable film credits are Wish You Were Here, Random 8, Three Blind Mice, Son of the Mask, The Goddess of 1967, Billy’s Holiday, Spider & Rose, Afraid to Dance.