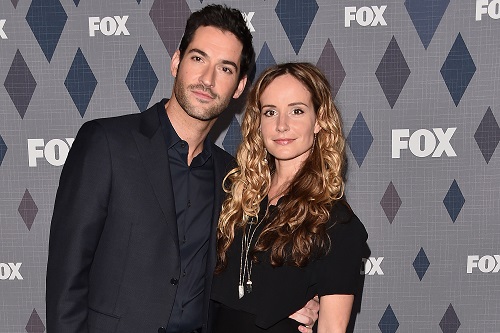 After five years of his divorce, Tom Ellis never have thought he would settle down with someone yet again. Yup, he is currently in a relationship with his wife Meaghan Oppenheimer. He tied the knot in front of his kids, family, and friends and also contributed to the charity.

The Lucifer star exchanged his wedding vows with wife Meaghan in a private ceremony. Likewise, there are only two photos posted about their auspicious affair. Let’s take a detour at their special day which made them a Hollywood power couple.

1st June 2019, will be marked as a very special day on both of the couple’s calenders. This is the day Tom Ellis and Meaghan Oppenheimer married their loved ones. Tom married his fiance who works in the entertainment industry and is credited for some good work as well. They tied the knot in Santa Ynez Valley in California.

Before marrying Meaghan, Tom was in a relationship with Tamzin Outhwaite from 2006 to 2014. From his former marriage, Tom is a proud father of three kids named, Marnie Mae Ellis, Florence Elsie Ellis, and Nora Ellis.

First of all, Tom and Meaghan arrived in a Hollywood fashion at their wedding. Both of them chose a rowboat as their mode of transportation. Furthermore, he thanked everyone who made it to their auspicious day and further wrote,

“My new wife @moppyoppenheimer was a little unsure about my choice of transport for the honeymoon. Thank you to everyone who made our special day so precious.”

The wedding was an extravagant affair and Tom was seen in a dashing black suit. He was looking very handsome and his spouse Meaghan was not far behind. She wore a long-sleeved, lace dress designed by famous designer Naeem Khan.

Tom and Meaghan started dating after meeting for the first time in 2015. Oppenheimer works as a writer and her notable works include Fear the Walking Dead and Queen America.

Besides that, Ildy Modrovich and Tom’s personal trainer Paolo Mascitti also made their way to the wedding.

Help To The Charity With Their Marriage

The couple has a golden heart. It is proved by their effort to charity at their wedding. The guest coming to the wedding did not have to bring any gifts but instead, they’d have to donate money to Planned Parenthood.

Through Planned Parenthood they help many couples to plan their kids. Tom Ellis posted a tweet thanking all the guest for their contribution. He tweeted,

“Thank You to all the people that have been asking about wedding gifts or charitable donations for my upcoming nuptials with @MoppyOpps that is so kind. If you would like to make a donation to @PPFA we would be very grateful.”

In the same way, Meaghan Oppenheimer also posted thanking all the contribution guest made to the Planned Parenthood.