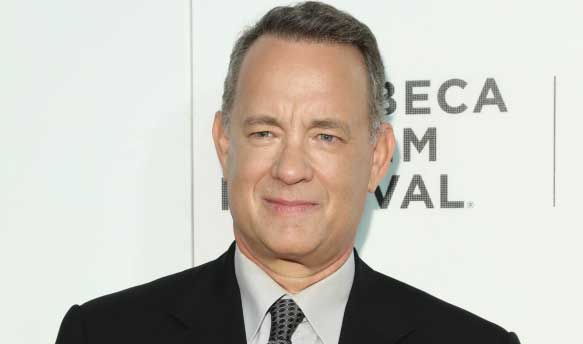 Tom Hanks is an actor and Filmmaker from the United States of America. The back-to-back Academy Awards-winning legendary actor Tom is known for his roles in the films such as Philadelphia, Forrest Gump, Cast Away, The Green Mile, Saving Private Ryan, and Apollo 13.

Hank was also awarded the Presidential Medal of Freedom of the then president of Barack Obama in 2016. In the same year, Tom was honored with the French Legion of Honor.

Hanks belongs to the American nationality of a mixed ethical background. Hanks celebrates his birthday on 9 July every year. His Zodiac sign is Cancer.

Recalling his early Life, Tom Hanks was born on 9 July 1956, in Concord, California, the USA, as Thomas Jeffrey Hanks to his parents, Janet Marylyn, a hospital worker, and Amos Mefford Hanks, a traveling cook. He grew up with his four siblings, and his mother died in 2016.

Regarding his education, Hanks joined Skyline High School in Oakland, California and went to Chabot College in Hayward, California. He dropped out the California State University to take his acting classes.

In 1978, Hanks appeared in the Shakespeare’s The Two Gentlemen of Verona and won the Cleveland Critics Circle Award for Best Actor. After that, Tom made his film debut with the film He Knows You’re Alone and appeared in the series Mazes and Monsters.

After that, he appeared in That Thing You Do!, From the Earth to the Moon, and Band of Brothers. Some of his films are Catch Me If You Can, Bridge of Spies, Philadelphia, and Forrest Gump. Tom has received a Golden Globe, a Screen Actors Guild Award, a People’s Choice Award, and an Academy Award for his roles in Forrest Gump.

Similarly, Tom is awarded a Golden Globe Award and an Academy Award for Best Actor for Philadelphia. In 2016, Hanks received a Presidential Medal of Freedom from President Barack Obama. Currently, Tom is busy with the science-fiction drama The Circle and Emma Watson.

Tom Hanks is a married man, and he has married twice in his Life. Firstly, he married Actress Samantha Lewes on 24 January 1978. They divorced in 1987, and Samantha died in 2002.

The former couple encountered through their profession. Later, they dated for several years before marrying. Hanks welcomed his first child, a son Colin Hanks with Lewes in 1977, a year before their marriage. In 1982, he welcomed his second child, a daughter- Elizabeth Ann Hanks with her.

However, then he cheated on his wife for another Actress Rita Wilson. As a result, the couple divorced in 1987. Following year, he married Rita Wilson. The duo is still together as of 2018. They also share two sons, Chet Hanks and Truman Theodore Hanks. Hanks’ first wife died of bone cancer in 2002. His eldest son Colin Hanks is also a popular actor in Hollywood.

With his second wife, Actress Rita Wilson, Hanks has two sons. They tied the knot on 30 April 1988. They have been together for 29 years. Hanks has a straight sexual orientation.

Tom Hanks has an average body with a height of 6 feet and a weight of 78 Kg. Hanks has Brown hair and Blue eyes color.

His net worth is estimated to be $350 million. He is one of the top 10 highest-paid actors in Hollywood. Hanks is also active on Twitter, Instagram, and Facebook.