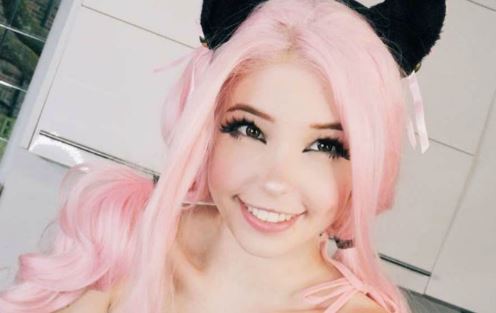 The social media is now taken as one of the biggest platforms for the public to explore their talent all around the globe. The social media star, Belle Delphine rose to fame as a cosplayer and Instagram personality. Not only this but she has also amassed over 700K subscribers on her YouTube channel as of 2019.

The 20 years old, Belle is originally from South Africa. Starting her journey in social media at the age of 14, she had already gained around 4 million followers on her Instagram which got banned in 2019. Many of her followers are eagerly waiting to find out her boyfriend, or who is she dating currently?

Let’s discuss her biography in the below sections. Stay tuned.

Coming from South Africa, Belle Delphine’s parents shifted to London, England to provide a better life to their daughter. Who would have thought that Belle would come up as a social media personality?

So far, she has not talked about her family and educational background. At the initial stage of her career, she created her social media i.e. cosplay account at the age of 14. Till that time, she used to work at a coffee shop.

On one side, Belle Delphine was updating her personal life on the social media, however, on the other side, she started working at a restaurant as a waitress. In order to earn money, she left the restaurant and began working as a nanny. With all her savings, she traveled all around the UK and France.

After deciding to make her career using the social media platform, Belle started making cosplay videos that easily left her with nearly 4 million followers on her Instagram account. However, her then Instagram profile was shut down due to the violation of its rules in July 2019. She now has over 195K followers n her new Instagram account. At present, she is active on Twitter with over 700K subscribers.

Belle Delphine suddenly stopped updating pictures on her social media in August 2019 that made her fans curious about her behavior. Many reports started claiming that during the time she was going to commit suicide as she had uploaded a short video dancing in a suicidal song.

However, Belle denied the rumors to be true and stated of being arrested after she painted someone’s car with a spray after her hamster had stolen. She announced the news of her disappearance via her Twitter account. As per the Business Insider, the police of the UK never released the arrest reports for Belle.

The 20 years old, Belle Delphine is not involved in any sort of relationship. She keeps her personal details under the wraps and has not talked about her boyfriend in the media. Well, she seems to be heading a single life and focusing on her career. She would surely announce to her fans if she would start dating anyone. For now, she is free of rumors.

The social media star, Belle Delphine is active on different social media platforms. Without any doubt, her main source of income is her social profiles. Before her first Instagram got shut down, she used to ask $25 a month to view her HD photosets and whoever promised to pay her $50 a month used to receive the access to her Snapchat.

Also, Belle had used viral stunts to make more money as she used to sell jars of bathwater on the rate of $30/jar. Currently, she has over 700K subscribers on her YouTube channel. As per the Social Blade, she makes monthly earnings of between $476 – $7.6K that enables her to earn between $5.7K – $91.3K yearly. At present, she has an estimated net worth of $500 Thousand and leading a lavish life.

Watch the video of Belle Delphine