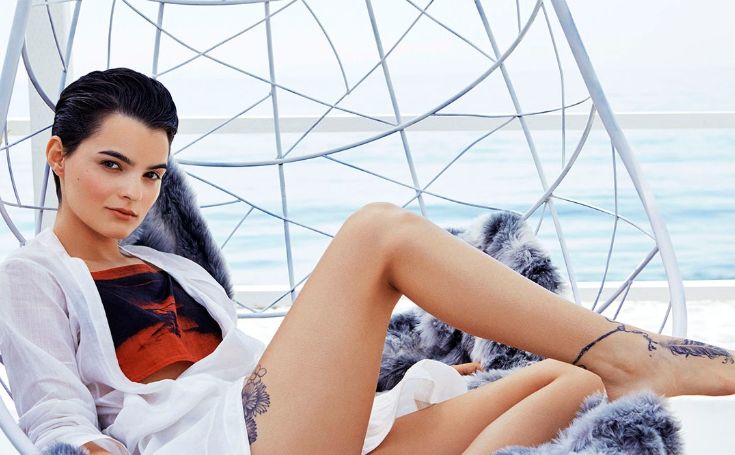 Brianna Caitlin Hildebrand Brianna Hildebrand is a Hollywood actress who rocketed to stardom after appearing in the web series Annie Undocumented and as Negasonic Teenage Warhead in the Marvel Flicks Deadpool (2016) and Deadpool 2 (2018).

Moreover, the actress is recognized as Elodie Davis in Netflix’s show Trinkets, which she has played since 2019.

To date, she has garnered a decent fortune and is living a happy life with her beloved partner, Jonneke Grisham.

If you want to explore more about their exciting love story, then keep scrolling down the article below until the last.

Who Is Brianna Hildebrand? Her Bio and Wiki.

Brianna first stepped into this earth on 14 August 1996 in College Station, Texas, the United States, as Brianna Caitlin Hildebrand, under the Leo birth sign.

She is of American citizenship and belongs to the white ethnicity as per her nationality.

Likewise, she is the daughter of Caleb Hildebrand (father), a car salesman, and Veronica Hildebrand (mother), a housewife.

So far, the star has attended the A & M Consolidated High School, which is located in College Station, Texas.

Then after acting in a few films, including The Voice Inside, Prism, and First Girl I Loved and became the cast of Marvel’s superhero movies Deadpool and Deadpool 2 in 2016 and 2018 resp.

Her notable films are Girl’s Night, Playing with Fire, Tragedy Girls, and Runt. Apart from movies, the lady has starred in three television series: The Exorcist, Love Daily, and Trinkets (2019–present).

Twenty-five-year-old Brianna, who is openly gay, is no more single. Currently, she is in an intimate love connection with her long-time girlfriend, Jonneke Grisham.

The gorgeous Texan actress Hildebrand met Jonneke on the teen lesbian romance drama First Girl I Loved in 2016. In the same year, the duo became their relationship official. Since then, they have lived a happy life together for nearly five years.

Caitlin, who became the first-ever LGBTQ superhero role on Deadpool, keeps posting snaps along with her partner Jonneke on her Instagram page. On 23 April 2019, the actress posted their vacation photo from Coachella, California, with the Grisham captioning:

At the moment, the lovebird lives together in their Los Angeles apartment.

Ever since joining the entertainment industry, Miss. Hildebrand has been collecting a fair sum of money to honor her impressive career.

As of 2022, she has a staggering net worth of $2 Million, and her primary source of earnings is her thriving profession as an actress.

Until now, she has performed different characters in TV series and films. Reportedly, the actress receives an average salary of $50110 yearly, so Caitlin could be paid in the same range.

Additionally, the lady is famous for starring in the hit marvel films Deadpool and its sequel Deadpool 2, which have gained financial and critical success. Deadpool, which was released on 12 February 2016, grossed more than $782 million against a budget of $58 million.