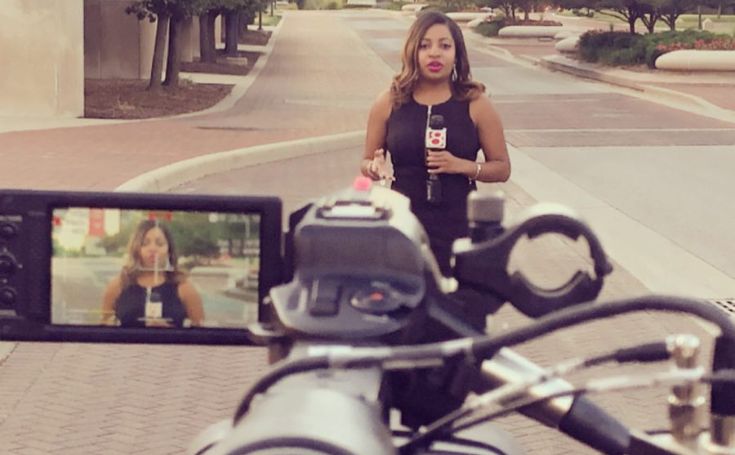 Bilingual reporter and news anchor Brittney Ermon receives media attention for her full professional ability in both Spanish and English. Currently, she serves for ABC-affiliated TV station KSTP-TV as a news reporter.

Before, she was employed at WMTV NBC15, Madison, Wisconsin and the former reporter for the news broadcasting media, NewsLink Indiana Television.

Ermon received an Indiana Broadcasters Association Scholarship for her performance and placed 2nd at the Presidential Election TV coverage competition.

Please stay tuned with us and know everything about this skillful news reporter.

Who Is Brittney Ermon?

The famous news host, Brittney, is a native of Chicago, Illinois, and held American citizenship. Likewise, she hails from African-American ethnic background; however, her exact birth date is still under review.

Ermon shares a good bond with her parents and never misses an opportunity to share pictures with them on her social sites. But the reporter has kept her parents and siblings under the wrap.

Regarding her education, she attended the Homewood-Flossmoor High School and later earned BA in Telecommunication, Journalism from Ball State University and received her MA degree.

Vigorously Reporting In The Field Of News

To pursue her further education, she enrolled at Ball State University in Muncie, Indiana, in 2013 and earned a Bachelor in Arts degree in 2017 with a triple major in telecommunications, journalism, and Spanish.

Later, she began as a feature writer for Ball State’s news daily and worked as the host for the Connections Live Program and restrained as a news reporter for her alma mater, Homewood-Flossmoor’s newscast Homewood-Flossmoor Chronicle.

The news anchor also landed a gig at the student TV newscast, NewsLink Indiana, as the news reporter and the college radio station, WCRD 91.3 FM as the news director.

After that, she joined Masters in Art program in journalism at Ball State instantly after her graduation in 2017. Simultaneously, Ermon continued to work and landed an extra gig as the graduate assistant for the Journalism Writing Center.

Splitting hot tea into her personal life, Brittney maintains a low-key profile referring to her private details. Further, she has not publicized whether she is dating someone or is living a single life.

Despite being a TV presenter, she isn’t much familiar with expressing her personal life. Ermon is on the top of her news career and working on getting success in her reporting work, so that the host prefers to work hard every day.

Currently, Brittney is busy on her news coverage projects, so she isn’t married to date.

As of 2022, WMTV NBC 15 reporter has piled an estimated net worth of $600 Thousand from her long professional career.

Similarly, a news reporter at KSTP TV acquires an average payroll of $43536 annually. As per her Linkedin, she has been employed for KSTP-TV since July 2021.

Formerly, Brittney worked for many TV stations, from where she earned a tremendous sum of wealth. With such earning, the journalist surely relishes a lavish lifestyle.

Ermon achieved many honors and awards as a prolific news anchor for her reporting work. In May 2016, the reporter participated in the Statewide Television Broadcasting Competition and ranked 2nd runner-up.

Also, she is the winner of the Indiana Broadcasters Association Scholarship, which stimulated her to broadcast in May 2017.

Apart, she contested at the Indiana Association of School Broadcasters and placed 3rd best TV news ancho plus grabbed the attention after winning the 2nd position for a best TV news story and radio news talk show host.