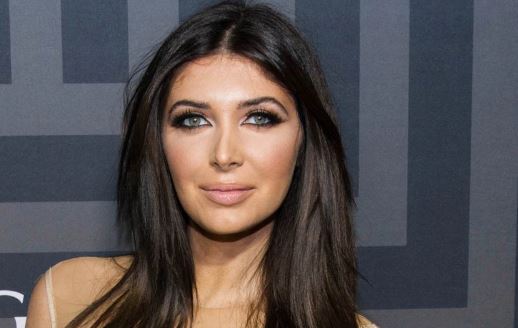 What is more, she is the best friend of Kim Kardashian and frequently appears on the hit E! show, Keeping Up With Kardashians. Further, she also appears in movies like Bruno(2009), Gastineau Girls (2005), and so on. What’s her relationship status? To know more about her personal life, read the article written below.

Brittny Gastineau was born as Brittny Amanda Erin Gastineau on November 11, 1982, in New York, USA. She is the daughter of father Mark Gastineau, former New York Jets defensive end football player and mother, Lisa Gastineau. Moreover, she is a half-sister, Killian Marcus Nielsen, from her father’s relationship with Brigitte Nielsen.

After their parents parted ways, she lived with her grandparents, Ernie Gastineau and Lou Gastineau. Further, she studied at a public school, Clarkstown High School North in New City, New York and completed her high school. Later, she went to the University of Alabama for graduation and returned to New York to pursue her model career.

After returning to Manhattan, Brittny started her career by signing a contract with Elite Model Management and became a model for the celebrity division. Soon after becoming a model, she became a part of Stuff magazine. Later, in 2005,  she signed a deal with L’Oreal Paris and enlisted at position 60 on Maxim magazine’s Hot 100 list. She did a runway show for Fashion Week, designer ED Hardy, and MAC Cosmetics.

Later, in 2004, she made an appearance in the entertainment field with the E! Network with her mother, Lisa Gastineau and began production of a reality series. In 2005, her reality series The Gastineau Girls was started. Also, she appeared as Kim’s best friend in the show ‘Keeping Up with the Kardashians along with Khloe Kardashian, Kris Jenner, Kendall Jenner, and Kylie Jenner. She appeared in the popular program MTV’s The Hill and Cribs.

Well, entering her relationship status, she is probably single and enjoying her bachelorhood for now. But, she has dated quite a several boys in her past. The Hills and Cribs star was in a relationship with Million Dollar Listing Steve Gold, an American Business Professional. The couple started dating in March 2018 and later broke up in 2019.

Moreover, she was also in a relationship with Thibaut Courtois, the Belgian footballer. The couple started dating in July 2017, and later, the couple broke up in February 2018. Besides, she dated Danilo Gallinari, an Italian Basketballer, from 2014 to July 2015.

5 Feet 8.5 Inches tall, Brittny was in a relationship with Marquis Lewis, an American artist. The duo was together from 2013 to 2014 June. During her association with Marquis, she was accused of domestic violence and got injured in the eye and face. She also filed a case against him. Besides, she dated Luis Miguel from March 2012 to May 2015. Their long relationship came to an end.

Moreover, there was news that she was linked with the stars like Nick Carter in May 2005, Jason Peterson (2004) and Doug Farro (2002). After such a tragedy in her life, Gastineau is currently living a low-key life, and there is no information about her relationship status.

How much Is Gastineau’s Net Worth?

According to celebrity net worth, Brittny’s net worth is estimated at around $5 Million. She earns this hefty amount from her career as a model and reality tv star. Moreover, she also appears in the movie and Tv series and receives a big chunk of money. In addition, she also appeared in campaigns for L’Oreal, Ed Hardy, and MAC Cosmetics which might give her a certain amount.

Even though she has earned such a hefty amount, Brittany is yet to reveal the details about her cars and house. There was news that she owns a home in Los Angeles, but details of it were missing. With such a great fortune, the reality star is living lavishly.